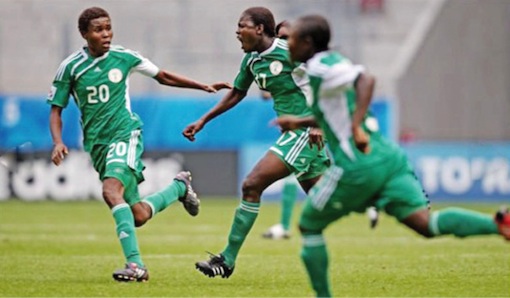 Nigeria’s Super Falconets on Saturday at the Samuel Ogbamudia Stadium in Benin, Edo State defeated their Tanzanian counterpart by 3-0 in the 2018 FIFA U-20 women’s World Cup qualifier.

One goal from Lilian Tule Nwuse in the 22nd minute of the first half and two second half goals from Rashidat Busayo Ajibade (62 and 69 mins), were enough to earn the Falconets the three maximum points.

The Nigerian players lost countless chances in the first half of the match they dominated right from the blast of the whistle.

The home side’s first goal came from a free-kick taken by Lilian in the 22nd minute, close to the visitor’s 18-yard box.

The Super Falconets began the second half on a sloppy note, but recovered their act ten minutes later.

Their improved effort was rewarded with two successive goals from Rashidat Busayo.

In a post match press briefing, the Captain of the Tanzanian side, Shamimu Hamisi, described the match as a tough one.

Hamisi disclosed that the encounter was their first international match, adding that they did not expect to be defeated with three goals margin.

The Tanzanian skipper who said her side would go back home to work on their mistakes, promised to defeat the Super Falconets on their home soil.

On her part, Captain​ of the Falconets, Famuditi Abiodun, said her team would go back to the drawing board to improve on their performance.

She promised a repeat of their superb performance in two week’s when they travel to Tanzania for the return leg, where she said they would also defeat their host.