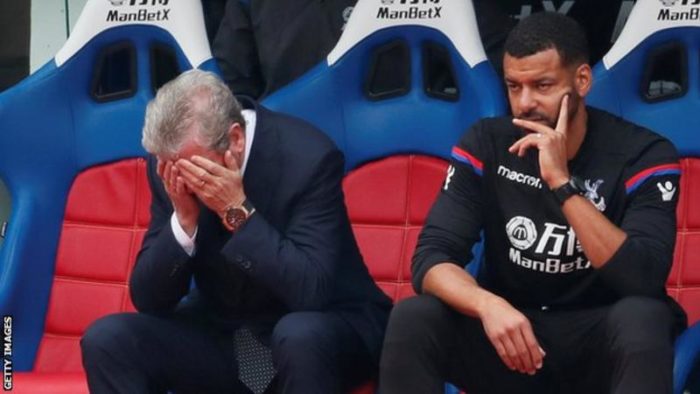 Crystal Palace became the first club in top-flight history to lose their opening five games without scoring as Roy Hodgson’s first match as manager ended in defeat by Southampton.

The Eagles paid for slack defending in just the sixth minute when a Dusan Tadic cross-shot was parried to the feet of Steven Davis, who side-footed home from 10 yards.

Palace’s direct approach was contained for the most part, though Saints keeper Fraser Forster did have to make point-blank saves to deny Christian Benteke and Jason Puncheon either side of half-time.

His resistance meant the hosts set a new top-flight record as they surpassed the 438 minutes Newcastle went without a goal at the start of the 2005-06 season.

Palace did not offer enough and allowed the away side to keep possession too easily as they secured a first win since 19 August.

Saints introduced Virgil van Dijk from the bench late on, the defender making his first appearance since declaring he wanted to leave in the summer.

His impact was minimal as his side easily saw out the closing stages, with Palace resorting to hopeful crosses and long balls, as they had for much of the afternoon.

BBC reports that the Dutchman had used a 3-5-2 formation in his opening three league games, switching to 4-3-3 at Turf Moor. Hodgson opted for 4-4-1-1, with Ruben Loftus-Cheek charged with playing close to Benteke.

It pointed a little to his days in charge of Fulham, where a pragmatic 4-4-2 proved hard to break down as he guided the Cottagers to safety against the odds in 2007-08.

But his side were anything but hard to get at in the early exchanges and Tadic easily found shooting space to allow Davis a tap-in for his first goal in 489 days.

The home side’s brief seemed to be to play direct to Benteke, and it looked as though they would need a clever flick or fortunate bounce to create meaningful openings.

All too often their crosses were from deep, with Saints full-backs Ryan Bertrand and Cedric Soares rarely letting their rivals in behind them to deliver from dangerous areas.