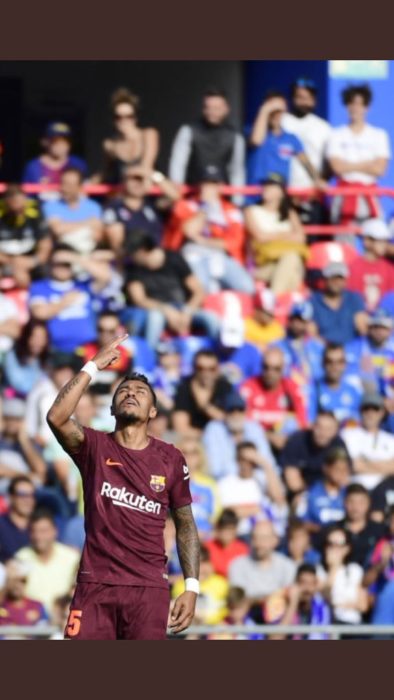 Substitute Paulinho scored a late winner as Barcelona came from behind to beat Getafe 2-1 and continue their perfect start to the new LaLiga season.

The Brazil international netted his first Barca goal with six minutes remaining as Ernesto Valverde’s men recovered from a dreadful first half to claim a fourth straight top-flight victory in 2017-18.

The visitors lost Ousmane Dembele to injury in the opening period of his full Liga debut and their Saturday afternoon got worse when Japan international Gaku Shibasaki scored his first Getafe goal in stunning fashion before the break.

But another of Valverde’s subs, Denis Suarez, struck for the first time since January as the visitors battled back in the second half, before Paulinho grabbed the winner just as it looked like they would have to settle for a draw.

Goal.com reports that leaders Barca now have 12 points from their first four games and sit seven clear of reigning champions Real Madrid, whose game in hand is a testing away trip to in-form Real Sociedad on Sunday.

Getafe remain on four points and have now gone 10 LaLiga matches without a home win, despite a brave performance.

The hosts made a bright start, forcing Gerard Pique into a rugby tackle on Jorge Molina to thwart an early attack, earning the defender a booking, although the resulting free-kick was wasted.

Getafe were inches away from moving in front when a neat passing move ended with Shibasaki’s cross from the left being put into the side netting by a stretching Molina only a yard out, with a vital deflection from Pique as the pass was making its way to the striker doing just enough to put him off.

Barca lost Dembele to a hamstring injury midway through the first half after he had attempted a back-heel near the corner flag, Gerard Deulofeu coming on.