[FROM THE ARCHIVES] ‘We Are Coming For You’, Robbers Write Residents 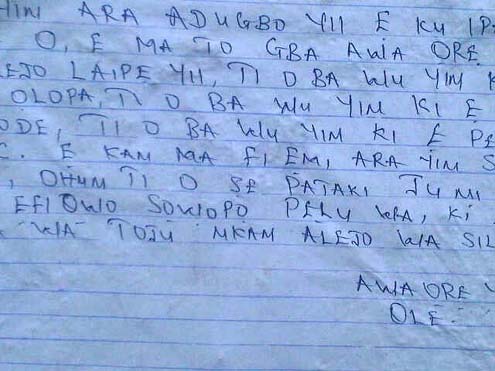 The letter written by robbers

Daring Nigerian robbers have sent an audacious letter to Lambe residents in Ogun State, southwest Nigeria, begging them for a warm welcome when they strike in their community in the coming days.

The robbers said in the letter, written in Yoruba language and pasted on many walls and streets, that they are coming ‘very soon’ and are not afraid of the police or other security agencies.

“If you like, inform the police or your security men or OPC, you will just lose your lives,” they warned.

Describing themselves as friends of the residents in Lambe community, the robbers called on them to get ready for their arrival and cooperate with them.

“You residents of this area be prepared to receive your friends very soon. If you like, inform the police or your security men or OPC, you will just lose your lives. What is important is to cooperate with us and to get ready to give us a warm welcome,” the robbers said in the short letter.

The letter, written in Yoruba language, was pasted on many walls on Akin Akindele, Community Road and Jelili Popoola Streets.

Panic and confusion have enveloped the community with a resident describing Lambe as ‘the playground of armed robbers.’

“Lambe has become the play ground of armed robbers. Incessant robbery attacks have forced landlords to flee the area and are now tenants in other places,” he said, pleading that his name should not be mentioned.

Landlords and tenants in the area are so confused that they do not know what to do and are prepared for the worst.

When P.M.NEWS visited the area, many of the residents were so petrified that they refused to speak.

A resident, who did not, like all others, want his name disclosed, said he will not inform the police as there might be mass killings.

“Besides, the police and the OPC cannot be trusted because they may be aware of their coming and will not do anything,” he said.

She explained that the residents are worried because of the lack of security in Nigeria.

She revealed that none of the residents wants to talk about it because “the robbers might be living among us.”

“ I have warned my husband to stay away from this matter because you do not know who is who in the area, “she said.

Another resident told P.M.NEWS that since they saw the letter, most residents do not sleep again in the night and the landlords and tenants are afraid to even inform the police or talk about it because those behind the letters could be among them.

P.M.NEWS gathered that one of suspects behind the impudent letters was arrested in the night at about 1.00 am and handed over to the police at Ajunwo Police Division.

When our reporter visited the station, the DPO was not around to comment on the matter.

Police said they were not aware of the arrest and sent our reporter to the Ogun State Police Command Public Relations Officer, Muyiwa Adejobi who did not return our calls.