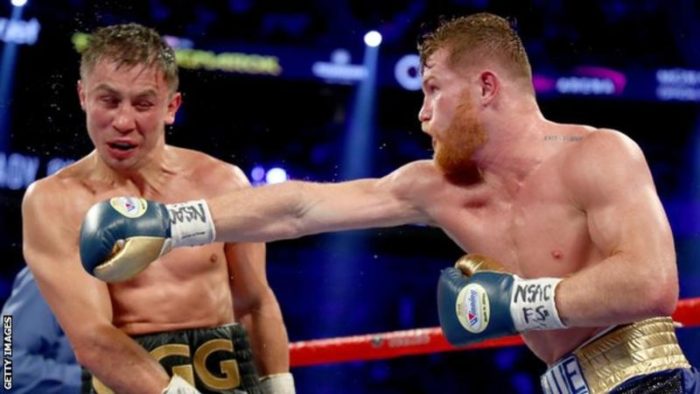 BBC Sports reports that there were boos when the decision was announced at the T-Mobile Arena, and both boxers shook their heads.

His Mexican opponent, 27, started and finished an absorbing fight the stronger, and also produced some of the more eye-catching shots.

Golovkin, though, landed more punches and had the better of the middle rounds.

Judge Adalaide Byrd had Alvarez as a clear winner, Dave Moretti scored the bout for Golovkin and Dan Trella had the fighters level.

In the build-up to the fight, Golovkin had described it as the “biggest of this era” – and both men later said they were open to a rematch.

Former heavyweight world champion Lennox Lewis tweeted: “I have GGG as clear winner. Loved that Canelo swung to the very end! Both are winners tonight.”

Former two-weight world champion Paulie Malignaggi said: “Canelo was never in it once it passed about round four or so.”

Floyd Mayweather Sr, whose son recently beat mixed martial arts fighter Conor McGregor in a boxing match, said the 118-110 scorecard was “ridiculous” and he saw the fight as a draw.

“I didn’t think either one of them fought that good,” he said. “That fight was kind of close, real close.”

“What they are saying is the score of a judge, who has been around for a long time and did a lot of my fights, maybe saw things that we didn’t see and maybe counted things that we should know should have been counted.

“The Nevada State Athletic Commission was asked if anything was going to be done about this. We don’t know, we hope.

“I don’t think anyone, if you take the score away, would say Golovkin would have got robbed if the score was even closer than it should have been, and Canelo would have won.

“The only dispute is that it was a score was so far away from reality that made the fight look the way it did. I’m saying they are two separate situations.”