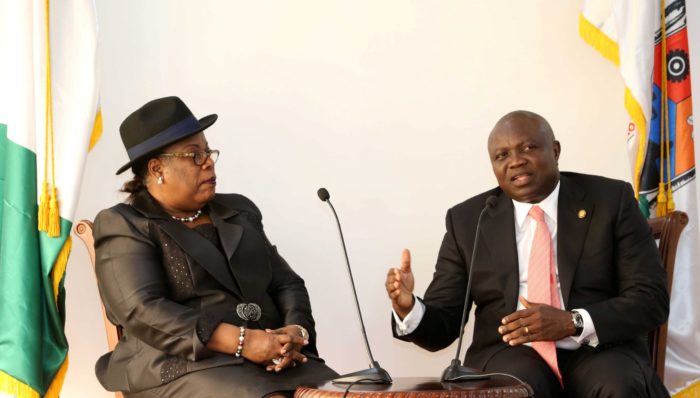 Lagos State Governor, Akinwunmi Ambode on Monday said his administration will continue to give utmost priority to the welfare of serving and retired judges in the State so as to enable them continue to give their very best to the economic prosperity of the State.

Ambode, who spoke when the outgoing Chief Judge of Lagos State, Justice Olufunmilayo Atilade paid him a courtesy visit at the Lagos House in Ikeja, Lagos, Southwest Nigeria said his administration on inception on May 29, 2015, embarked upon reforms in the judiciary to improve on their service delivery, noting that Lagos State had become a reference point of how the judiciary should run.

Alluding to the fact that appreciable progress had been made by the judiciary in the last two years of his administration, Ambode said that part of the reforms was to ensure that judges who retired after meritorious service to the State were comfortable after retirement.

“Reforms in the judiciary is a continuous thing and in areas, in which we have not done utmost well as you so much envisioned, we would improved on them and we would also ensure that we make life comfortable for our retired judges as you move into that club. I am very particular about the welfare of judges, that is a very sacred institution that we must continue to ensure that even in retirement there is so much for them to look back for the efforts they have made.

“That is why it is very easy for us to bring some of our retired judges to continue to serve us because that basket of knowledge is not found everywhere and we cannot afford to disconnect with the knowledge possessed by our judges,” he said.

Ambode also underscored the contributions of the Judiciary to the Lagos success story, saying that the harmonious relationship among the three arms of government had placed the State on a steady pedestal of prosperity.

He said the Lagos Judiciary over the years, had maintained a tradition that had made the State an embodiment of law and order, saying that it was only in an atmosphere where the Judiciary was seen to be independent that the State could continue to experience peaceful co-existence and economic growth.

“I want to openly declare here that I’ve had a fantastic relationship with the judiciary and with your good self. One of the things I tried to set out was to emphasize security reforms and judicial sector reforms of which you’ve been a good partner in progress. We have achieved so much in the area of security reforms and you can also attest to the fact that there has been peaceful coexistence of Lagosians in the last two and half years that you have been here.

“I want to say clearly here that if there is actually an arm that I’ve actually had collective responsibility with is actually the judiciary. You have been totally independent and we have not in any way interfered in all the things that have been done in the Judiciary and again everybody see the Lagos Judiciary as the shining example of how the Judiciary should be run,” he said.

Commending the efforts of Justice Atilade, who is expected to officially bow out as the Chief Judge of the State on Sunday, September 24, Ambode expressed optimism that the tradition which the Lagos Judiciary is known for would continue to hold sway long after her departure.

“Collectively, the judiciary, executive and the legislature arms of government, we have done very well in Lagos to keep that harmony and peace, ultimately for the prosperity of Lagos. I want to thank you for serving this State,” he said.

Earlier in her remarks, Justice Atilade said the visit was to thank Ambode for providing a conducive atmosphere and cordial working relationship between the executive and the judicial arm of government in the State during her period as Chief Judge of the State.