Over 90 magistrates sacked in Ondo 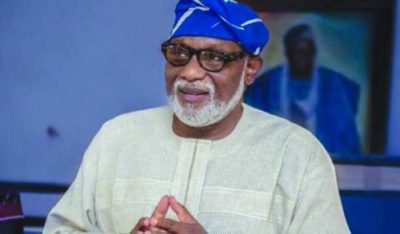 There is an uneasy calm in Ondo State as over 90 magistrates in the State Judicial Service Commission have been terminated by the Rotimi Akeredolu government.

Investigations by SaharaReporters revealed that some magistrates and staff attorneys received disengagement letters from Justice Olanrewaju Oluwatoyin Akeredolu, the Acting Chief Judge, while others were suspended, with some of the letters citing “perceived irregularities” or claiming the appointments had not followed “due process.”

The suspended magistrates were asked to stay off court premises and to hand-over government properties in their possession pending a plenary consideration and review of their appointments.

Findings by SaharaReporters, however, indicate that most of those affected by the unfavorable action were employed between 2010 and 2017, during the administration of the then governor, Olusegun Mimiko.

Many of the magistrates, mostly females and staff attorneys, were directly employed by the immediate past Chief Judge of the state, Justice Olasehinde Kumuyi, who served for close to seven years under Mr. Mimiko.

During his tenure, Justice Kumuyi was alleged to have used the machinery of the judiciary to make phony appointments by placing a huge financial burden on the service after leaving the post as the state’s chief judge.

The sudden action against the magistrates by the All Progressives Congress (APC) government in the state has resulted in an outburst of criticism on social media.

Some of the critics, as monitored by our correspondent, are questioning the motives of Governor Akeredolu, while those in support of the action described it is a step towards reducing the financial burden placed on the state.

Inside sources tell SaharaReporters that final push that led to the fall of the magistrate judges was planned at a secret meeting held between the Acting Chief Judge and some senior High Court judges of the Ondo State judiciary.

One of those sources said that the senior high court judges were unsatisfied with what they termed “excess appointments” in the judiciary, as it has adversely affected the finances and some benefits of many of them.

To that end, they agreed that some magistrates and senior registrars mostly employed by the past administration should be removed.

He explained that the agreement was later conveyed to Governor Akeredolu who consented and granted the Acting Chief Judge the authority to overhaul the state judiciary system, which is perceived to be bloated in size.

“These cabals about three of them but [whose names] I don’t want to mention are among the State High Court Judges that sold the idiotic ideas of sacking/suspending the magistrates and staff attorneys to Governor Akeredolu,” he said.

It was gathered that those judges then fled the state and did not resume activities on Monday following the end of the long vacation.

A top female judiciary staff in the State Ministry of Justice who confirmed the latest developments in a telephone chat with SaharaReporters at the weekend also claimed that the sacking of the magistrates was deliberately done to reduce the population strength of the judiciary.

She added that the sacking was also plotted by the three judges in the judiciary to divert the funds being used in paying the magistrates salaries into taking care of the senior high court judges in the state.

She also stated that some recently-appointed High Court judges have not been inaugurated because state authorities claim the little money available is being spent on salaries.

And while it is the tradition that serving state judges receive a befitting accommodation, at least a Prado Toyota Jeep and a wardrobe allowance, none has been given under the present government.

“Aside this, the allocation to the judiciary is not enough and the wardrobe allowance for the judges is being reduced,” the source said.

“So, they concluded with the governor that the only way out is to chase away some people because of the too many appointments in the
magistrates that is taking much money.”

Also speaking to our correspondent, an executive member of the Nigeria Bar Association (NBA) in the state, speaking on the condition of anonymity, revealed that the sacking of the magistrates was hatched between the governor and the leadership of the judiciary.

He wondered why some judges in the state judiciary are now coming out to expose irregularities in the appointments of some magistrates and senior registrars in the service of the judiciary.

“If you visit the probity registry now, all the staff there have been transferred to different places, this is the section in the judiciary that handles the issues relating to property and it is just like the NNPC of the service.”

He also revealed that the new rule in the judiciary is that the Nigeria Bar Association (NBA) must be the body that would recommend the magistrates for appointment and employment.

“It is true that many of them (magistrates) are receiving their sack letters but some of them were not outrightly sacked, but suspended, as the procedure that brought them into the system as claimed is too faulty and improper,” he said, adding that the real question now is where the so-called ‘almighty senior judges’ where when the magistrates now being fired were being employed in the first place, or during the last administration.

SaharaReporters has also discovered that despite the outcry in the state judiciary, Mr. Akeredolu has not officially constituted the Judicial Service Commission (JSC), which is saddled with investigating the appointment of the magistrates.

Confirming our findings, a legal practitioner in the Ondo State High Court said the JSC would have been in the best position to review all the appointments if it had been constituted in accordance with the law.

The lawyer, who also pleaded anonymity, however faulted the action of the state government, arguing that the judiciary, under the Acting Chief Judge, is being used as an instrument for political vendetta against those opposed to the current administration.

“If the state government plans to take actions against them it should be through the JSC, which is not yet officially constituted by Governor Rotimi Akeredolu,” he said.

“Because, it is the Ondo State JSC which was put in place by former governor Mimiko that gave the magistrates appointment letters and now you are [tactically] dismissing them from the judiciary service.”

He expressed the view that since Governor Akeredolu has not constituted the JSC, it means the government under his control is bending the rules by not following the laws of dismissing the magistrates.

Several sources confirmed that other magistrates in the judiciary are planning to protest and show solidarity over the sudden disengagement of their colleagues.

SaharaReporters learned that the leadership of the Magistrates Association of Nigeria, which is on tour of the state, planned to see the governor on the issue, but cancelled after being informed about his trip to the US with President Muhammadu Buhari.