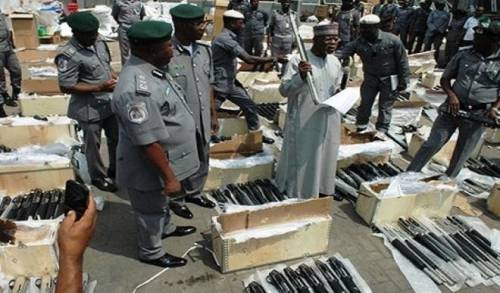 Customs officers led by their Comptroller-General inspecting the seized arms

Details of how illegal arms importers bribed customs officers at the Apapa Port N1.4m in order to prevent the search of the container by them have been revealed.

In an eight-count charge filed by the Attorney-General of the Federation against the accused at the Federal High Court, Lagos, he alleged that the accused: Mahmoud Hassan, Oscar Okafor, Donatus Achinulo, Salihu Danjuma and Matthew Okoye who is said to be at large offered N1.4m as bribe to customs officers to prevent them from checking the container containing illegal arms imported from Turkey.

Two of the five persons, Oscar Okafor and Donatus Achinulo have, however, informed the court of their intention to change their pleas from “not guilty” to “guilty.”

However, the judge directed the defendants to notify the Attorney General of the Federation of their intention to have their plea changed. He then adjourned the matter to tomorrow September 26 for the continuation of trial.

The defendants were arraigned on June 14 by the AGF on an eight-count charge along with one Mahmoud Hassan, Salihu Danjuma and Matthew Okoye.

On arraignment, they all pleaded not guilty to the all the allegations including unlawful important of 661 pump-action rifles into Nigeria.

Justice Faji denied them bail on the ground that the gravity of the charges leveled against them are enormous.

In the charges, the AGF said the defendants imported 661 pump-action rifles from Turkey through the Apapa Port in Lagos, using a 40-feet container, which they falsely claimed contained steel doors.

To facilitate the illegal importation, the accused allegedly forged a number of documents including a bill of lading, a Form M and a Pre-Arrival Assessment Report.

According to the prosecution team led by Mr. Nebo Cole, in order to evade payment of Customs duty, the accused allegedly forged a bill of lading issued at Istanbul on January 9, 2017, falsely claiming that it was issued at Shanghai, China.

In the forged Bill of Lading, they allegedly filled “steel door” as the content of the container instead of rifles.

They were also said to have allegedly offered a bribe of N400,000 to an official of the Nigeria Customs Service attached to the Federal Operative Unit to influence the said officer not to conduct a “hundred percent search on the 40-feet container with number PONU 825914/3.”

The prosecution also alleged that the first accused, Hassan, corrupted government officials when he gave N1m to Customs officers at the Apapa Port in order to prevent the search of the container by them.

The eight counts charges filed against them border on conspiracy, importation of prohibited firearms, forgery, altering of forged documents and bribery.