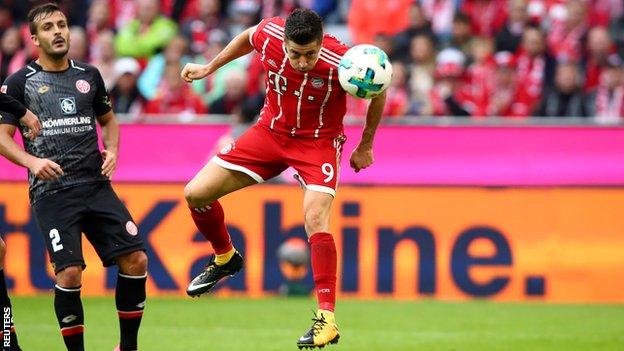 Bayern Munich were held to a draw at Hertha Berlin as they began life after the sacking of Carlo Ancelotti with frailties still evident.

Three days after the departure of Ancelotti, who left after a 3-0 Champions League defeat by Paris St-Germain, Bayern responded brightly with a dominant first half.

But they were pegged back – and lost winger Franck Ribery to injury – after the break.

Second-placed Bayern are five points behind Borussia Dortmund at the top of the Bundesliga.

The hosts were awarded a penalty six minutes later when Vladimir Darida collided with Bayern midfielder Javi Martinez, but after consulting the video review system introduced into the Bundesliga this season, referee Harm Osmers reversed his decision and restarted play with a drop ball.

Martinez should have doubled Bayern’s lead on 31 minutes but headed Ribery’s cross over the bar, before Robert Lewandowski had a shot cleared off the line by Hertha defender Niklas Stark as the visitors threatened at will.

But Pal Dardai’s side hit back as Ondrej Duda poked home after a teasing run and cross from Genki Haraguchi on 51 minutes.

Bayern’s afternoon worsened as Ribery was carried off on the hour with a knee problem after over-extending his leg to control the ball.

Sagnol sent on Kingsley Coman and summer signing Niklas Sule to search – ultimately in vain – for a winner.