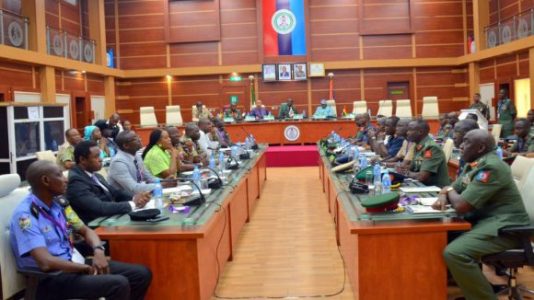 ECOWAS service chiefs at a meeting

Mr Awudu Gumah, the Head Planning, Research, Monitoring and Evaluation of the ECOWAS Gender Development Centre, says there is the need for member states to ratify international conventions and domesticate same through their parliaments.

He said this on Wednesday in Niamey at the technical session of the ongoing ECOWAS Parliament Fourth legislative de-localised meeting on gender, women empowerment, child and social protection, human rights and the vulnerable groups.

Gumah made a presentation on the harmonisation of gender policies within the ECOWAS region and the implementation of ECOWAS text on gender and development among member states.

While speaking on the challenges, perspectives and role of the ECOWAS Parliament, Gumah said the non ratification of international, continental and regional instruments was one of the challenges of harmonising gender policy in the region.

This, he said was especially so because the instruments varied which made it difficult for harmonisation.

He emphasised the need for the domestication of international, continental and regional instruments, adding that they were critical for the harmonisation of policies and laws within the region.

He added that effective regional convergence, gender mainstreaming and varying degrees of gender responsiveness in member states had also remained a challenge to the commission.

Gumah also identified the under representation of women in decision making processes as a challenge to the commission.

According to him, this can affect the formulation of policies and laws that affect women in the region.

He attributed the inability of the region to derive benefits from its demography to the high unemployment rate as it was also the reason youths in the region migrate to Europe and America in large number.

The ECOWAS official said there was the need for member states to learn from Rwanda, a country he said had done a lot to ensure full women representation.

Mr Jallow Samba, a parliamentarian from Gambia, however, said that the political will of government of member states was critical to ensure effective harmonisation of policies.

He noted that the political situation was hostile to women in most African states, stating that the issues should be looked into.

Mrs Toungara Kamara, Second Deputy Speaker ECOWAS Parliament, said women should not allow themselves to be exploited, but, however, added that men needed their support to get into political offices.

Mr Souley Dioffo, a Nigerien parliamentarian urged the parliament to focus more on sensitisation of member states to ensure the harmonisation of policies in the region.

He also said that there was the need to build the capacity of parliamentarians in their various states in this regards.

According to him, sensitisation is critical to enable citizens in the region know their rights as well as change their orientation.

He added that gender should not be considered in terms of vulnerability but what they could bring in.

The News Agency of Nigeria (NAN) reports that the five-day de-localised meeting is being attended by representatives from members states.

Sen. Stella Odua, Solomon Ahinawi and Rilwan Akanbi that were supposed to represent the Nigerian parliament at the meeting were conspicuously absent.

The meeting, which is expected to end on Oct. 7, will discuss the commission´s challenges, perspectives, its role and the respect for women´s rights in member states.

The experience of Niger in terms of harmonising national laws relating to gender policies will also be discussed at the meeting.