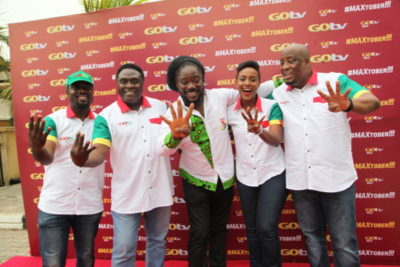 Pay-television service provider, GOtv, will, in October, make available to subscribers on its newly launched GOtv MAX bouquet an exciting range of series and reality shows.

Among the cracking programmes scheduled to air in October are Empire, The Walking Dead, A Thousand Ways to Die andFear Factor. GOtv MAX subscribers will have access to the hottest movies and series on Fox Entertainment and Sony MAX as well as riveting reality programmes on CBS Reality.

On Fox Entertainment, Empire Season 4, which started on 28 September, will continue in October, while Walking Deaddebuts on 23 October. On Sony MAX, a new series, Hack My Life, will premiere on 27 October.

Movie fans will also enjoy many movies on Sony MAX. These include Night and the City on October 11, Killing Salazar on 15 October, Bad Lieutenant on 17 October, Murder On The 13th Floor on 22 October, Badge of Honour on 28 October and Anaconda on 29 October. Sony MAX delivers 24-hours of foreign entertainment series, movies and reality programmes specially made for male audiences.

FOX channel is a premier entertainment outlet that prides itself on bringing ‘The Best, First’ award-winning, ground-breaking and critically acclaimed programming.

GOtv MAX subscribers will get to experience the thrilling and exclusive premieres of the best shows on FOX within hours of the United States broadcast. The hot line-up includes the hit television drama, Empire, in which Taraji P. Henson plays the feisty “Cookie Lyon” with a flashy fashion sense and witty remarks, opposite her ex-husband and the ruthless head of the Lyon empire, “Lucious Lyon” played by Academy Award nominee, Terrence Howard.

CBS reality will open subscribers’ eyes to the weird and wonderful sides of life as well as the extraordinary moments, which transform everyday life. All of this, in addition to all La Liga matches live on a new sports channel, SS Select 4, select live games of the English Premier League and a wider sports offering, which includes the recently acquired WWE and African football leagues, is available at an affordable N3,800.

As part of MultiChoice’s ongoing efforts to expose GOgetters to exciting new content, GOtv will give all active GOtv Plus customers a taste of the GOtv MAX package with an open view period of the channels from the 1st until 31st of October 2017.

“We are delighted that our GOtv Plus customers will get to experience this new world of entertainment. With more package options now available to our valued GOtv customers, they can choose a subscription plan that best fits their needs and budget. We remain committed to delivering the best entertainment that is affordable in order to give millions of television viewers the opportunity to enjoy quality digital entertainment,” John Ugbe, Managing Director, MultiChoice, said.

He added that quality entertainment has always been a key focus on the GOtv platform, stating that MultiChoice is excited to continue building entertainment options for its subscribers.

“We understand that times are tough, but that doesn’t mean that our customers have to miss out on world-class entertainment. Sports just got bigger and better with the GOtv MAX package. Our subscribers will get access to all La Liga matches, along with more entertainment choices for the whole family”, he said.