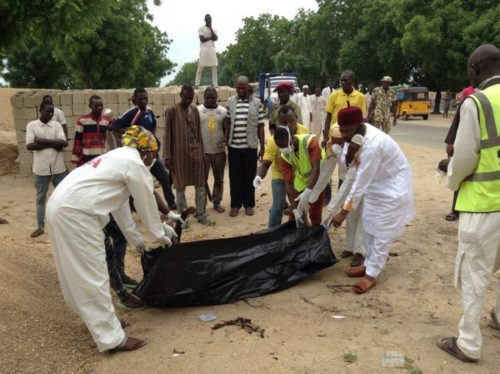 The Police in Borno on Sunday said two female suicide bombers were killed while trying to sneak into Maiduguri metropolis.

Mr Victor Isuku, the Police Public Relations Officer, confirmed the incident to the News Agency of Nigeria (NAN) in a telephone interview in Maiduguri.

Isuku said that the incident occurred on Sunday evening along Maiduguri-Gamboru highway.

He said that one of the suicide bombers detonated an Improvised Explosive Device (IEDs) strapped to her body and killed herself, while the other bomber was gunned down by security operatives before she detonated the bomb concealed to her body.

Isuku explained that the incident occurred at the outskirt of Maiduguri, adding that there were no casualties recorded in the incident.

“Preliminary information available to me indicates that two female suicide bombers tried to sneak into Maiduguri, one of them detonated the IED on her body and killed herself while the other one was gunned down.

“Police EOD teams have been deployed to the scene to sanitize the area,” he added.