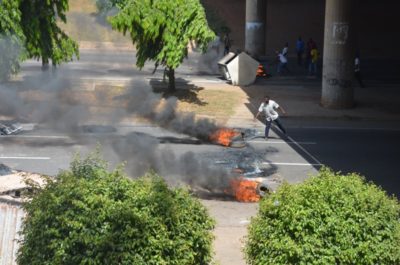 Scene of violent protest by taxi drivers in Abuja

Our Reporter with agency report

Commercial taxi drivers under Painted Abuja Taxis (PATs) on Wednesday dissociated its members from the protest that paralyzed social and economic activities in Abuja for several hours.

Mr Shehu Yar’Adua, the chairman of the group revealed in Abuja that the protest was carried out by miscreants.

He said that speculation that the protest was because a taxi driver was killed or injured by the FCT Joint Task Force (JTF) was not true.

Yar’Adua said the injured person was not a member of PATs but a private driver, who was with his family, had problem with the JTF that resulted to fight.

“When the incident happened, the people around thought he was our member and I think in the course of the fighting, he fell down.

“That was what people saw and then concluded that he was shot dead by the JTF and this is not true.

“The information came to us but before we could investigate, all roads leading to Wuse market were barricaded by miscreants, who took advantage of the false information,” he said.

He said the situation was brought under control with the support of security agencies and other stakeholders, adding that PATs was in cordial relationship the Vehicle Inspection Office (VIO) in the FCT.

Earlier, the protesters had wrongly alleged that a commercial taxi driver was shot dead by the JTF.

Some of the protesters said the task force was being used to frustrate the operation of taxi drivers.

Mr James Ibe, one of the protesters and a commercial taxi drivers, said he had regularly been arrested and made to pay fines of between N7,000 and N25,000 to bail their vehicles from the JTF custody.

Ibe noted that most of the drivers were graduates, who took to driving because of failure of the government to provide employment.

Mr Segun Adebayo, one of the protesters, said the continuous molestation and frustration of lives and efforts of the drivers to make ends meet was discouraging.

“The government did not give us jobs, we have on our own decided to provide for ourselves and now, our efforts are being frustrated.

“It is with this driving that we are feeding our families and meeting up with other financial obligations,” he said.

Adebayo appealed to the FCT minister to intervene in the matter to ensure that taxis were allowed to load and discharge passengers in the various designated motor parks in Abuja.

Mr Dauda Musa, another protester, said he was recently arrested inside Berger Bus Stop by four military men, six policemen and other security agents in Abuja

According to him, they arrested my vehicle along with some others and we were made to pay N25,000 each for alleged illegal parking inside a bus stop.

He said the security personnel and task-force had always operated without their name tags, alleging that the task-force was exploiting drivers.

“We have had enough of this Joint Task Force in FCT, they have never allowed taxi drivers to earn a living for themselves,” he said.

Meanwhile, the FCT Police Command said that it arrested some suspects in connecttion with the disturbance between operatives of the Directorate of Road Transport Services ( VIO) Taskforce and cab operators at Wuse area of the FCT.

The command’s Spokesman, DSP Anjuguri Manza, however, said that normalcy had been restored.

Though, he did not mention the number of suspects arrested.

“Some hoodlums who were trying to take advantage of the false rumour to cause problem in the FCT have been arrested and investigation is in progress,’’ he said.