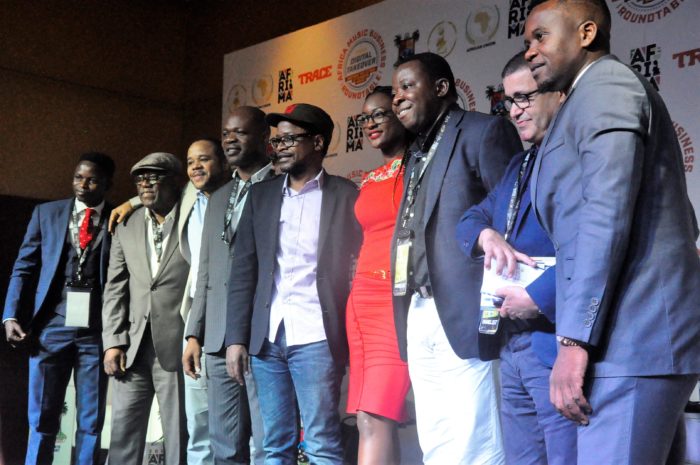 In a press conference and Business Roundtable organized by AFRIMA, stakeholders have discussed the way forward to grow the African music industry in it’s entirety.

The Head of Culture, AUC, Angela Martins opened with a goodwill speech from the AUC, commending the relentless work of AFRIMA in promoting African music, culture and creative enterprise in Africa. Ms Martins also thanked the host country, Nigeria who through its support for the host city, Lagos has successfully hosted Africa’s leading creatives and musicians at AFRIMA for 3 years. 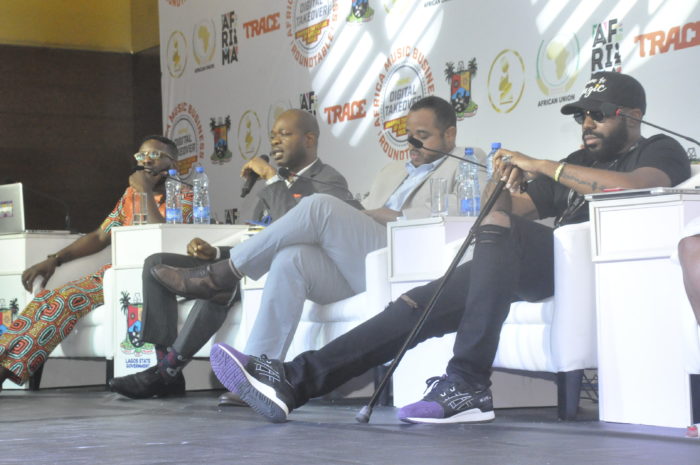 Ms Angela noted in her Speech ‘The theme of the Roundtable Digital Takeover: Shaping the Future of African Music is in line with the African Union Agenda on the promotion of the new information and Communication Technologies (ICTs). Digitization is the order of the day. We are glad that this theme was chosen so that music professionals can debate on it and come up with a clear roadmap on how to keep abreast with these new
information and communication tools…African music can make great strides and reach out to new continental and global markets.’

At the First Plenary Session; African Music Marketing and Distribution, Rikki Stein, noted that the key to marketing is education. He opined that young music industry practitioners must be ready to learn and get
their ‘teeth into the matter’. He also said that African artistes must have the global music space in mind while working on their music.

Michael Ugwu advised that Intellectual Property is important for every artiste in the digital age. Ugwu noted that record labels makes 4 Million dollars a day from streaming. ‘It is critical to have a great lawyer or a
great legal team’ he added. There are things such as DMCA, content IP to protect copyright ownership but digital space gives the space of massive reach as well as massive infringement.

Samo Onyemelukwe said that capacity development in the entertainment industry in Africa is part of the goals of Trace TV. He said that it is one of the reasons why it partnered with AFRIMA 2017. He encouraged music artistes to develop a huge local base at home instead of making huge music investments with worldwide tours. Onyemelukwe said that more investments need to be plugged in to develop and create music content in Africa. He also said that they have launched a digital streaming platform, Trace Play, which gives subscribers access to over 200 entertainment channels affiliated to Trace.

Orifa said that artiste managers need to answer the basic analytics to reach its audience. ‘Who your fan is, where are they—it is a world without borders but the fan base may be sitting here in Africa. How best you can reach them—is it on tours, the media’. Orifa also commented that the African Union must encourage a unified policy where African songs are not restricted to its country by national copyright policies.

Munya Chanetsa, explained the factors that have made music an emerging market such as reduction of data cost which encourages streaming, cheap and locally produced Smartphones which increases the access to African music. He noted that streaming technology through its algorithms will suggest music content around the interest of the consumer, thereby making the industry a consumer-centric one. The fluidity of financial exchange through electronic channels has also helped access purchase to live music concerts.

After the break The 2nd Plenary Session tagged Music Business Financing in Africa was opened by Femi Osinubi. Osinubi made his presentation based on the PwC 5 year forecast of the Electronic and Media (E&M) industry in
2017. The forecast projected a growth in the entertainment industry in Nigeria where he highlighted the emerging trends in Africa. Osinubi said that globally E&M is on a decline but projection on Nigeria shows that E&M
industry will enjoy a 12.1% percent growth with technological advancements in the music industry. He agreed with other stakeholders that streaming, freemiums and audience centred promotions are some of the strategies used
by players in the industry. Albeit the stiff competition in the industry and the engagement of international music interest in the continent, Osunibi is hopeful that once the government can create and enforce
policies against piracy, the industry will grow exponentially.

Dr Sipho Sithole noted that African music must be appreciated as the foundations of popular music genres like Jazz, Pop and Blues, which was developed after the Trans-Atlantic enslavement. Beyond the cultural appreciation, African music ought to be paid for its intellectual property deposited in the archives of the West without royalties to the original creators of the music content. He is hopeful that with the celebration of African legends like Fela, Hugh Masekela, Manu Dibango, music artistes like Davido, Sauti Soul and Yemi Alade have a quantifiable and enviable
heritage to contribute to.

Ibrahim El Mazned said that Africans need to collaborate more in the music business. He said that the current music infrastructure will not be able to involve the international markets. ‘The whole of Africa has five music
markets while France has seven music markets’. Mazned launched Visa for Music, a platform set to solve the collaboration challenges in the continent by exposing African music to the Middle East and the rest of the
world.

Kenny Ogungbe noted that the digital space is the future and that we must all move with the times in order not to be left out. He recounted the era of music CDs, ‘Those days, Eedris Abdulkareem slept under the bridge, 2Face shared a flat with Plantashun Boyz. The first song ever to be played on MTV was a song by 2face’ now you have all sorts of platforms where music artistes can earn money through the click of the button’.

Representing the MD, United Capital Securities Ltd, Jude Chiemaka, Wale Onusi, asserted that Nigeria entertainment industry contributes 95 jobs to the economy annually. This 1% job increase has pushed the nation’s GDP to 1.5 Trillion Naira and this growth is likely to double in few years. He noted that Music has become a business and the criteria for getting funding starts is the quality of the music, and the ability of artistes and managers to sell their dreams to investors in a business-like manner.

Meanwhile, Africans on the continent and in the diaspora are eager for the AFRIMA 2017 awards ceremony as the African-American Pop-icon, Akon and Cameroonian diva-broadcaster, Sophy Aiida will host the World Class music
event at 6PM on Sunday, 12 November 2017, Eko Hotels and Suites, Victoria Island, Lagos. The main awards ceremony will take place after the Red Carpet session where the crème of the creative industry, music lovers and diplomatic and government personalities will make their presence grand at the AFRIMA 2017 Red Carpet.