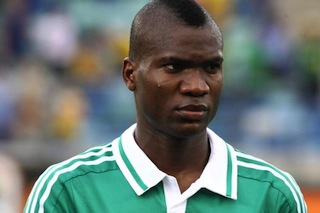 Super Eagles forwards Odion Ighalo and Brown Ideye have been named in the team of Africa Legends scheduled to face Kano Pillars Football Club in a charity match on Dec. 14.

The match is scheduled for the Sani Abacha Stadium in Kano and it is being organised for the Internally Displaced Persons (IDPs) in the North-East of Nigeria.

The duo will be among several other star footballers who will sweat it out to raise awareness on the plight of the IDPs.

Former Super Eagles captain Nwankwo Kanu confirmed to newsmen in Kano on Friday that the two players have agreed to be part of the charity match tagged “Match4IDPs’’.

“I have spoken to Ighalo and Ideye and they have agreed to be part of the awareness match for the IDPs on Dec. 14,” Kanu said.

Speaking also, the match’s Chief Coordinator, Abi Goodman, said some Nigerians in diaspora have also agreed to join the train to create the needed awareness on the IDPs’ plight.

“These Nigerians in diaspora include Detective-Sgt. Bassey Osagie who is the Toronto Police Service Representative at the Toronto Youth Cabinet at City Hall, as well as Zainabu Otiti-Obanor.

“Osagie is a Nigerian-Canadian who volunteers for the Canada Health Mission Outreach and provides extended health care for the poor and underprivileged.’’

Goodman added that a number of ambassadors and Nollywood stars, such as Ali Nuhu, have also been confirmed to be available for the event.

She also said the programme has already got the backing of the Kano State Government and the Emirate Council.

“This is why we will also hold an auction night in Kano, where the legends will auction their autographed jerseys and other personal effects to build up the charity fund,’’ Goodman said.