Photo of the week: Mugabe’s visitors from Namibia 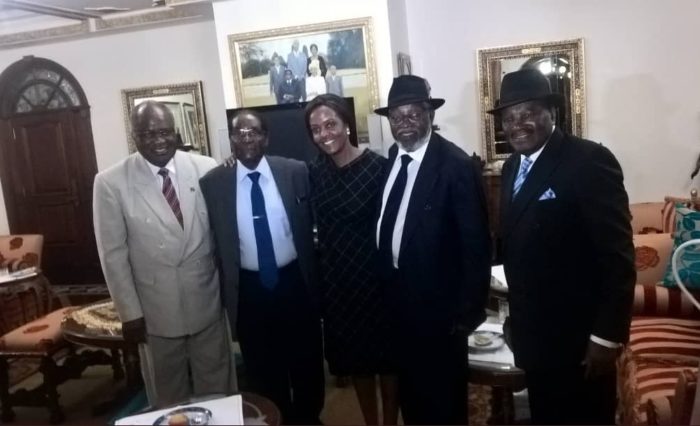 Moments after the swearing-in of Emmerson Mnangagwa as Zimbabwe’s new president on Friday, deposed leader, Robert Mugabe and his wife Grace, got some visitors from Namibia.

Like Zimbabwe, Namibia waged a struggle for independence and Sam Nujoma was the hero of that struggle. But he did not follow Mugabe’s example, he rather looked further south, taking a cue from Nelson Mandela.

Two years after, he also stepped aside as President of the ruling party, SWAPO(South West African People’s Organisation). Sam Nujoma is 88 years old and he has effectively retired from politics.

His successor President Hifikepunye Pohamba, also came calling. As second President of Namibia, he reigned from 21 March 2005 to 21 March 2015. Pohamba, 82 years old, was the President of SWAPO from 2007 until his retirement in 2015. Pohamba was a recipient of the $5million Mo Ibrahim Prize in 2014, one of the rare African leaders to have won the award.

Then, there was also among the visitors, current Vice President Nickey Iyambo. He is 81 years old and must be on his way out, in the Namibian tradition.

In awarding Pohamba the Mo Ibrahim Leadership Prize, the award committee noted: “President Pohamba’s focus in forging national cohesion and reconciliation at a key stage of Namibia’s consolidation of democracy and social and economic development impressed the ‎Prize Committee. His ability to command the confidence and the trust of his people is exemplary. During the decade of his Presidential mandate, he demonstrated sound and wise leadership. At the same time, he maintained his humility throughout his Presidency.”

Salim Ahmed Salim, a member of the committee went on to praise President Pohamba’s commitment to democracy and governance.

“During the decade of Hifikepunye Pohamba’s Presidency, Namibia’s reputation has been cemented as a well-governed, stable and inclusive democracy with strong media freedom and respect for human rights.”

Doubtless, Mugabe’s visitors represent a different African spirit: They did not sit tight in office, unlike Mugabe, who spent 37 years and ruined his country.