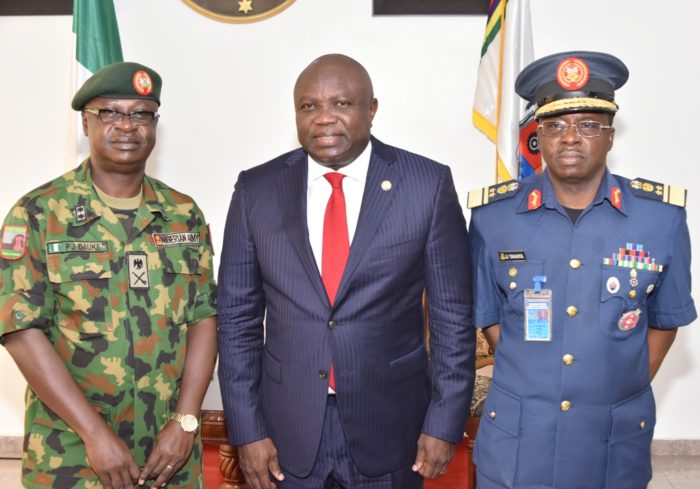 The Lagos State Government has perfected plans to acquire Intelligence Surveillance and Reconnaissance (ISR) platform, which is a specialized light aircraft, to secure creeks and riverine communities in the State.

Governor Akinwunmi Ambode who spoke on Monday restated the commitment of the State Government to ensure the comfort and safety of residents and investors, saying the general welfare of the people remains a top priority for his administration.

.Speaking at Lagos House in Alausa, Ikeja when he received Commanders of Armed Forces formations in the State on courtesy visit, Governor Ambode said it was gratifying that in the last two and half years of his administration, security agencies have been extremely cooperative with the State Government and working hard to ensure safety of lives and property.

While lauding the cordial relationship that exists among security agencies in the State, Governor Ambode said it was also commendable that there had never been any major civilian-military clash since the advent of his administration, and urged the military to sustain the peaceful atmosphere in the State.

He said: “All the security agencies in the State have been extremely cooperative with us. They have been able to put down that foundation that we have always wanted that without security there will be no development and irrespective of the changes we have had in terms of leadership of armed forces formations in the last two and half years, they have all done extremely well.

“Lagos is a cosmopolitan State and no matter how much efforts or resources government is putting in place, if there are no leg runners to execute those resources or even use them effectively, we will not be talking about peace.

“My aim is to ensure that every Lagosian sleeps and wake up comfortable and whatever it takes for us to do that is through the utmost cooperation of security agencies and I believe that you will offer that and as we move Lagos forward, it will have positive impact on Nigeria as a whole because everything good that happens in Lagos, is a reflection of what is happening in Nigeria.”

While assuring that the State Government would not relent in supporting security agencies with critical infrastructure and logistics to enhance their job, the Governor also urged them to continue to put the equipment procured for them into good use for the overall security and comfort of the people.

Yahaya particularly commended Governor Ambode for his massive developmental strides as evident by the various infrastructural renewal projects across the State, as well as efforts to position Lagos as a cosmopolitan city not only in Nigeria and Africa but in the world.

He also lauded Governor Ambode for the support to security agencies, saying the move by the State Government to acquire ISR platform would go a long way in securing the creeks and helping security agencies to fish out criminals.

“I want to most sincerely thank Governor Ambode for all the support he has rendered to security services of the State particularly in the area of vehicles and other logistic support. I am aware you are at the verge of recording another feat getting an ISR platform to ensure a 24/7 surveillance in the creek areas of Lagos State so that we will be able to fish out the criminals that disturb people from going about their lawful business,” Yahaya said.