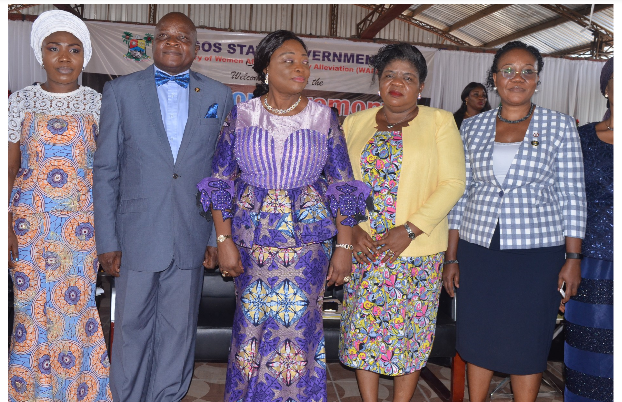 Lagos State Governor, Akinwunmi Ambode on Tuesday identified entrepreneurship and job creation as key to tackling poverty and hunger in the country.

Ambode spoke at the graduation of 12,935 students from the various skills acquisition centres of the state government across the state held at the Lagos Television ground, Ikeja, Lagos, Southwest Nigeria.

The governor said his administration was convinced that large scale entrepreneurship and massive jobs were the twin battlefronts through which government could aggressively deal with poverty and hunger.

“Equally, it is only those that have skills that will get jobs and only those that are educated can acquire skills. Consequently, we are not only creating skilled and healthy graduands, we are also producing self-dependent, self-employed individuals, who are employers of labour in not too distance future,” Ambode who was represented by the Commissioner for Commerce, Industry and Cooperatives, Rotimi Ogunleye said.

The governor said it was heart-warming that as against a total of 5,951 trainees graduated in 2016, “we are giving each of today’s 12,935 graduands an opportunity we did not have. We were trained to study and look for jobs. But we recognised today how much the world has changed and we are determined to prepare you for the future by training you to create jobs for yourselves and others rather than wait for jobs to be created.”

The governor said Lagos State was in the forefront of job creation through the Ministry of wealth creation and had set up Employment Trust Fund to promote entrepreneurial activities that would be powered by youths resident in the State without regard to ethnic, religious or political considerations.

Deputy Governor of Lagos State, Dr. Oluranti Adebule, who was represented by the Permanent Secretary in her office, Yetunde Odejayi said only those who had one skill or the other could survive in the economic circumstances surrounding the nation, saying that to this end, efforts of the government to empower the people, especially women through laudable programmes as this could not be overemphasized.

Commissioner for Women Affairs and Poverty Alleviation, WAPA, (Dr) Lola Akande disclosed that 5,951 students graduated from the programme last year, saying that the current over 12,000 graduands trained by the centres represented over 100 percent increase from last year’s figure.

“To further enhance their success as business owners, our Trainees undergo Entrepreneurial training and Industrial Attachments in well established companies and Organizations across the State.

“To the 12,935 trainees graduating in various skills today, let me encourage you to consider yourselves as people with great ideas and competencies which make the sky only your beginning. The onus is therefore on you to go forth with a determination to contribute to the economic and industrial advancement of the country,” she said.