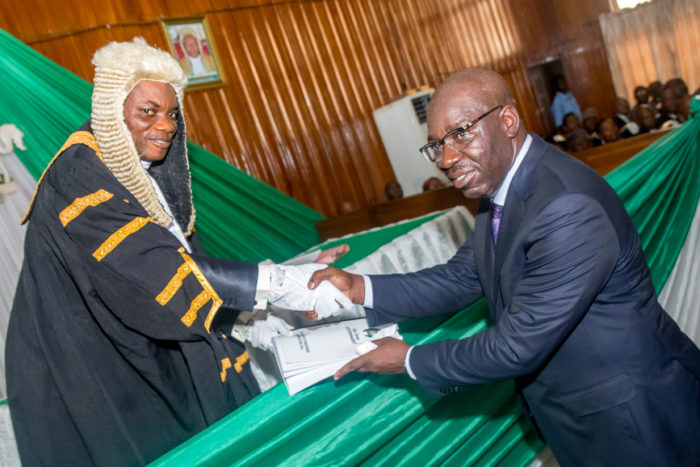 Governor Godwin Obaseki of Edo State on Wednesday presented the 2018 budget of N146 billion to the State House of Assembly for approval.

The governor assured that the budget would consolidate on the infrastructural and socio-economic gains of the outgoing year 2017.

According to him, “we have a budget size of N146,659,830,444 billion, which is a 15 percent nominal increase over the 2017 budget. Revenue estimates for the budget are based on a $45 bench mark for crude oil and average daily production of 2.3 million barrels per day as well as an increase in Internally Generated Revenue (IGR), as a result of reforms in revenue collection.”

He assured that the 2018 budget would build on the recovery witnessed in 2017, and stressed that “We intend to revitalise the state economy by increasing capital spending, hence, we envisage a capital/recurrent expenditure ratio of (54 percent :46 percent) which highlights our vision to grow, with cash receipts capped at N120,099,830,443.52 to be sourced from statutory allocation, IGR and grants.”

Analysing the budget estimates, the governor said “a larger part of the 2018 budget will be devoted to the development of physical and social infrastructure across the state to improve the standard of living of Edo people.

“Our government will consolidate on the gains we have made in wooing investors to the state. Alaghodaro Investment Summit was a huge success and I must thank you Mr Speaker and Honourable members for your support for the laudable initiative. We have been bombarded by inquiries from all over the world after the investment summit as investors have come to accept that Edo is indeed ready for business. This budget is expected to drive growth and progress in all sectors of the state,” he said.

However, the much hyped budget presentation wad disrupted by power outage.

No sooner the Speaker of the House, Kabiru Adjoto, opened plenary at about 12 noon, than the three-hourly ration of power supply to the Ring Road axix expired, resulting in power cut to the House.

The heavy duty power generating plant in the Assembly could not save the situation, as it had packed up several months ago, resulting in the use of a small generating set to power the public address system alone.

The normal national anthem that could have preceded the budget presentation was set aside, as the Speaker simply invited Governor Obaseki to go ahead to present the budget.

Obaseki who went ahead with his presentation, had to hurriedly make an abridged budget presentation in the hot Chamber.

Obaseki who could no longer bear the heat, had to cut short the presentation and begged to leave.

“Mr Speaker, I could go on and on, but I am sorry, the environment here is inclement. So, permit me to end this budget presentation by thanking everyone who has made the last one year remarkable and successful one for my administration,” Obaseki said.