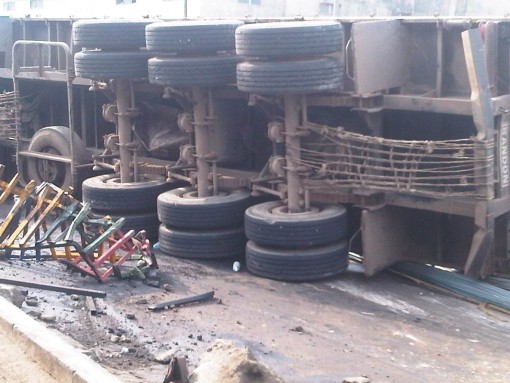 Seven persons, including a pregnant woman, were crushed to death in an accident involving a white Volvo truck and a red Nissan blue bird at mechanic village along OGTV/Ajebo road in Abeokuta.

Mr Clement Oladele, the Sector Commander, Federal Road Safety Corps (FRSC), in Ogun, who confirmed the incident to the News Agency of Nigeria (NAN) on Wednesday, said the incident happened on Tuesday night.

“The truck was coming from OGTV road going into Abeokuta, while the car was going to Mile 6. The truck had break failure, lost control and crossed to the opposite lane and hit the incoming vehicle.

“The only dead female victim was pregnant, ” he said.

The sector commander said the corpses of the victims were taken to Federal Medical Centre (FMC), Abeokuta, mortuary, and the injured ones were admitted at the same hospital.

He, however, said that the driver of the truck who caused the accident had fled.