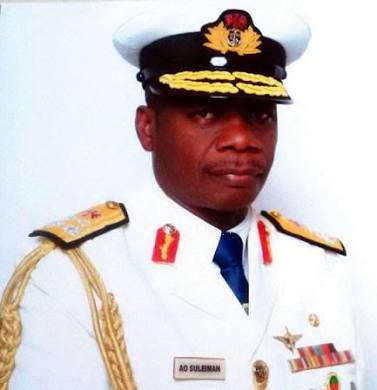 The ceremony, which took place at the Headquarters of JTF in Yenagoa, three officers namely – Thomas Otuji, Roy Nweke and Obiora Anyikwe – were decorated with the rank of Commander from the rank of Lt Commander.

Also the Commander of Sector 4 of JTF, Col. M.U. Muktar, was decorated with the rank of Brigadier General.

Addressing the officers, Apochi congratulated them for their elevation, pointing out that their new positions called for greater service to the father land.

He urged them to do all within their powers to attain at least a position higher than a Brigadier General in the service so that they could go home in retirement happy and fulfilled.

The commander also advised them not to rely on their connections among the higher ranks for promotion and other favours, but to work hard to earn all promotions and placements.

He used the occasion to admonish those who could not make it to continue to work hard and pray to be listed in the next batch.

Responding on behalf of the decorated officers, Muktar thanked the military high command for recognising and rewarding them with the new ranks.

He pledged that the new ranks would spur them to work harder in their areas of responsibilities.

The ceremony attracted spouses and relatives of the decorated officers.