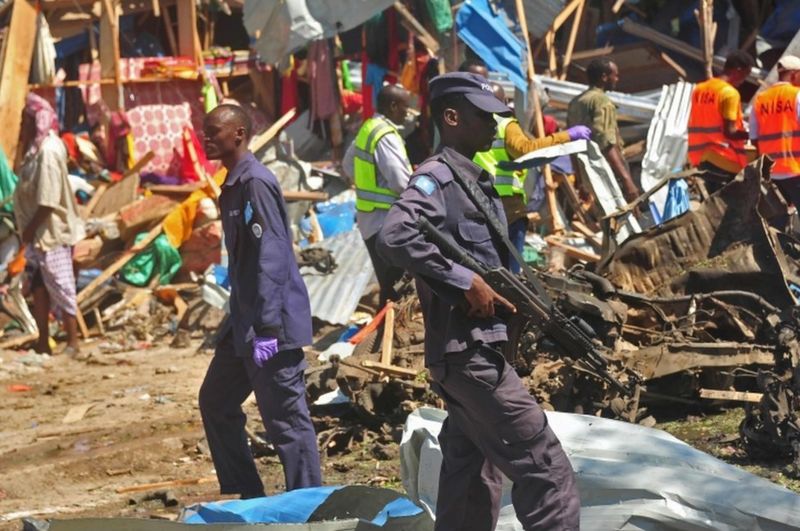 Security officers at the scene of the suicide car bomb, which hit a market in southern Mogadishu.

The African Union’s plan to trim its Somalia peacekeeping force (AMISOM) will hurt the mission unless extra equipment is found to offset the troop decrease, the mission’s leader told Reuters.

The force of 22,000 deployed a decade ago is set to lose 1,000 soldiers this year as part of a long-term plan to pull out of the country and hand security to the Somali army.

AMISOM head Fransisco Madeira told Reuters: “unless we have a proportionate forces multiplier in terms of equipment … intelligence, electronic intelligence, that (withdrawal) will have a very considerable effect on our mission.

“We believe the UN will find ways and means of covering or making up the gap that might result.”

The diplomat from Mozambique was speaking on the sidelines of a security conference in Mogadishu. He said it was hard to estimate the number of Al Shabaab fighters.

AMISOM is confronting the Islamist militant group Al Shabaab, whose ranks have been swelled by Islamic State fighters fleeing military setbacks in Libya and Syria.

Militants killed more than 500 people in an attack in the capital Mogadishu last month. It was the deadliest such attack in the country’s recent history.

AMISOM deployed to help secure the government of a country that since 1991 has struggled to establish central control.

The peacekeepers helped push al Shabaab out of Mogadishu but the group still frequently attacks civilian and military targets.

Somalia’s minister of internal security Mohamed Islow told Reuters the government wants the lifting of an arms embargo “so that our forces get enough weapons and military equipment.”

The UN imposed an arms embargo on Somalia shortly after the nation plunged into civil war in the early 1990s.

It partially lifted the ban in 2013 to help equip government forces.