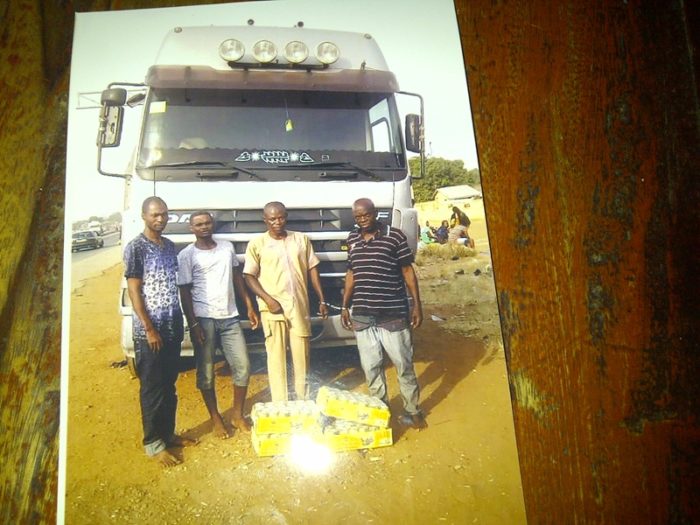 A truck driver, Chukwudi Nwandiche, 32, from Enugu State and three others have been arrested at Gwagwalada area of Abuja, Nigeria with the N6.4m worth of apple juice they allegedly diverted which was entrusted in their care to deliver to a customer in Kano State.

The goods were entrusted in their care by the management of EuroGlobal Foods and Distillers Limited located in Sango-Ota, Ogun State.

The suspects, according to a police source were arrested at a warehouse they offloaded the goods at Gwagwalada, Abuja while waiting for a buyer from Sokoto State to pay them the sum of N2m for the goods.

The arrest of the suspects, the source said, was made possible by the Deputy Commissioner of Police, DCP in charge of FSARS, Lagos, Mr Ibrahim Kaoje who drafted a team led by DSP Olaniyi Festus to track and arrest the suspects and recover the goods following a
complaints by the management of EuroGlobal Foods Limited that the truck driver they engaged had disappeared with their N6.4m goods.

The police source alleged that trouble started for the suspects when the management of EuroGlobal Foods and Distillers Limted engaged one Nduka, now at large to help the company to look for a truck to convey about 3,000 cartons of apple juice valued at N6.4m to a customer in Kano State.

The source alleged that after the driver loaded the goods and headed to Kano State, Nduka allegedly called him on phone around Kogi State axis that he should drive the truck to Gwagwalada, Abuja and offload the goods into a warehouse owned by Isah for a buyer for N2m.

The goods was to be delivered within 24 hours.

Nemesis, however, caught up with the suspects when the management of EuroGlobal Foods reported to Kaoje that the truck driver they entrusted with N6.4m goods to deliver to a customer in Kano State had disappeared with the goods.

Followiing the report, Kaoje directed a team led by DSP Olaniyi Festus to fish out the suspects and the goods.

The police team tracked the suspects to Gwagwalada and arrested them and recovered 2,500 cartons of the goods while Nduka managed to escaped.

The arrested suspects and recovered goods were moved to the station.

During investigation, the truck driver and others allegedly confessed to the crime and said that Nduka told them to divert the goods to enable him sell it for N2m and share the money instead of taking it to the owner in Kano.

A police source said that the suspects would be charge to court after conclusion of investigation.