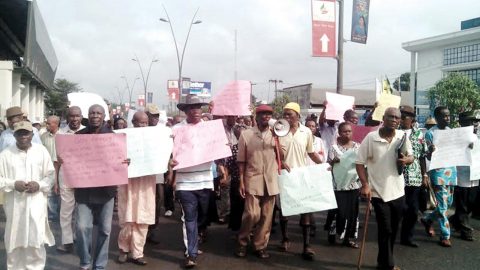 Pensioners in Abia on Thursday staged a protest round the major streets of Umuahia, the state capital, calling on Gov. Okezie Ikpeazu to pay their 18 years’ pension arrears.

The senior citizens, numbering at least 1,000, drove round the town in hired buses, beginning from their office on Abam Street, Umuahia, to Government House and State House of Assembly complex.

Operating under the aegis of the Nigeria Union of Pensioners, the protesters expressed disappointment over the inability of the government to pay their pensions and gratuities.

They accused the government of being insensitive to their plight.

Speaking at the Government House, the Chairman of the union, Chief Chukwuma Udensi, said that the nine months arrears were inherited from the past administration, adding that they were paid last by the present administration in February.

He said that the governor’s plea that they should exercise patience until the Federal Government disbursed the next tranche of Paris Club refund “is unacceptable to us”.

Udensi recalled that they had exercised enough patience, adding that they showed solidarity for about the two years Ikpeazu’s election was being challenged in court.

“Today, we feel betrayed by the same administration which bluntly refused to grant us audience for dialogue on the pension/gratuity matters, in spite of our many calls.”

He described government’s action as sheer insensitivity to the well-being of the pensioners whom, he said, “have been dying in their numbers”.

He said that pensioners in the state had continued to groan in penury and silence for the past two years and that many could no longer afford to pay rent and their children’s school fees.

Accoring to him, many of them had been ejected from their rented apartments by their landlords, while their children had been compelled to drop out of school.

“We are tired and dehumanised; we are gradually being exterminated out of existence while our children are being forced into all sorts of slave labour.”

Udensi said that the leadership had at different fora advised the government to devise an easy means of clearing the backlog of gratuity by setting aside N100 million monthly to no avail.

On the union’s next plan should the government continue to ignore them, he said: “Then we will show them our nuisance value.”

Meanwhile, the state Head of Service, Mr Vivian Uma, who received the pensioners, appealed to them to exercise restraint.

Uma assured them that their message would be conveyed to the governor for necessary action.

The protesters carried placards some of which read, “Abia Government is wicked to Abia pensioners”, “Pensioners are dying daily for lack of food and medical care,” and “Is it a crime to be a pensioner?”