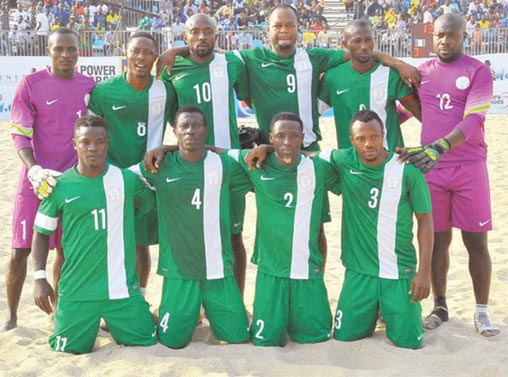 Ten players have been selected at the Birnin Kebbi camp of the Super Sand Eagles for the COPA Lagos Beach Soccer Tournament, opening in Lagos on Dec. 8.

The Head Coach of the team, Audu Adamu, told the News Agency of Nigeria (NAN) in Lagos on Thursday that the new team would represent Nigeria at the CAF Beach Soccer tournament, billed for Egypt next year.

“These selected players will represent us at the World Cup qualifiers in Egypt. I have so much hope in them and I’m confident that they will deliver.

“Our performance in COPA Lagos will further reveal to us where we need to work on and improve on,’’ Adamu said.

Others are Ekujumi Eganosi and Emeka Ogbonna both are of Lead UTD FC in Ojo, Lagos, Abu Azizz of Rangers FC Enugu, Suleiman Muhammed of Ifeanyi Uba FC and Bulangi Umar of Kebbi Beach Soccer.

The four new players, who made the team are Muhammed, Umar, Eganosi and Ogbonna.

The Managing Director of Kinetic Sports, Samson Adamu, the organizers of COPA Lagos, said that this year’s event would be huge because of the partnership with the Lagos State Government.

“We have come a long way and with our partnership with Lagos State, we know things will only get better.

“Already because of this partnership, one of the most renowned coaches in the world Tehina Rota of Tahiti would help train our home-based coaches,’’ he said.

The Lagos State Commissioner for Information and Strategy, Mr Steve Ayorinde, said that Gov. Akinwunmi Ambode was partnering with the tournament organizers as part of his commitment to making Lagos a centre of attraction.

“Tourism, arts and sports are sectors that our amiable governor understands to be the oil sector, we have seen Kinetic Sports manage COPA Lagos and the tournament has all these traits.

“We believe in the future of COPA Lagos and we are ready to continuously work harder to ensure that we tap into every area this tournament comprises of.

“Talking about sports, fashion, music, tourism, all these and more are embedded in COPA Lagos and will keep our youths engaged during the festive period,’’ he said.

The Special Adviser to the Governor on Sports, Deji Tinubu, said that Lagos State was proud to be a part of the success story of Kinetic Sports.

“Samson is a Nigerian youth that has single-handedly organised a tournament of this magnitude for almost a decade now; because of his consistency he is a success story.

“I want our youths to challenge themselves, nothing is too small as long as you have passion for it and you have a vision that sees beyond your challenges.’’

The COPA Lagos tournament is to hold from Dec.8 to Dec. 10 at Eko Atlantic City in Victoria Island, Lagos.