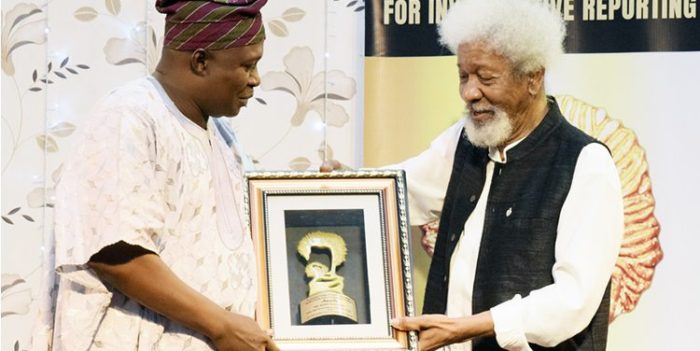 The 2017 WSCIJ-Nigerian Investigative Journalist of the Year, Adekunle Yusuf (left), receiving his award from Wole Soyinka during the twelfth award ceremony.

Mike Okwoche of TVC News was the compere and ‘Footprints of David,’ a dance drama group, provided entertainment.

Several prominent Nigerians in Law, Academics and Journalism such as Femi Falana, Prof. Ralph Akinfeleye,  , Ayo Obe, Dr. Oby Ezekwesili, Prof. Lai Oso, Chair of the 2017 Judges’ Board and many others were in attendance. The Deputy Head of Mission, Kingdom of Netherlands in Nigeria, Michel Deelan was also present.

Prof. Ropo Sekoni gave his welcome address during which he Thanked Prof. Wole Soyinka for his support of the centre. The annual lecture of the centre had held as usual on Wole Soyinka’s birthday, focusing on the nexus between electricity and education, two major problems that need to be addressed nationwide.

He also mentioned that training had been provided for cartoonists during the year. With the financial backing of the MacArthur Foundation, the centre also conducted a development training for practicing journalists. The centre also partnered with Oxfam to develop a new initiative; food security and agricultural programme. The categories of the Wole Soyinka Prize for Investigative Journalism have been reduced to six; print, television, radio, online, editorial cartoon and photojournalism as well as agricultural and food security category, supported by Oxfam.

He said years ago, there was an award for broadcast journalists who reported police brutality, adding that as SARS is in the news, with citizens exposing them for their numerous human rights violations and corruption, the centre supports the clamour of citizens for the reform of the Nigerian Police and other institutions.

Sekoni stated that there was a need for judicial inquiry into the activities of SARS, before any reforms could be done. “It is not the reorganization that will come before the inquiry. Citizens deserve to know what the nuances of this corruption are. There is also need for a new vision and structure of police in our country,” he said.

He also spoke about the slave trade in Libya. “the unfortunate return of slave trade requires thorough investigation of the Nigerian side of the faces behind human trafficking. Africa cannot afford a third slave trade. The first was masterminded by the Arab world and the second by the Western world has done enough damage to Africa. Nigeria cannot afford to have its citizens sold to Libyans or anyone else for that matter.”

Musa Abdulazzeez, Head, Influencing and Public Engagement, Oxfam in Nigeria gave a goodwill message after Prof. Sekoni’s speech. He began by acknowledging everyone present and giving a brief insight into what Oxfam was about. Oxfam was founded in 1942 during WWII when the Greek Blockade was in place.

He describes Nigeria as “a wealthy nation of poor people,” saying that Oxfam also tried to transform negative attitudes towards women and foster a better relationship between men and women.

The Footprints of David entertained the audience with a dance drama that highlighted brutality of Nigerian citizens by members of the armed forces. The drama highlighted how soldiers acted lawlessly and brutalize the citizens they were meant to protect.

Motunrayo Alaka, Coordinator, WSCIJ gave a statement on brutality of citizens by state security agents.  She began with the story of Lucky John, a bus driver who went missing, saying that an anonymous caller informed his wife that her husband was in SARS’ detention. According to her, his wife went there and the Investigating Police Officer, IPO claimed that he had been arrested because the phone number of an armed robber was found on his phone, while she was asked to pay N200,000 bribe to secure his bail.

Alaka added that after a month going back and forth, the woman got to know that her husband had been killed extra judicially by the SARS operatives when a police source confirmed it, saying that the police spokesperson claimed that he had taken them to the hideout of armed robbers and that he was killed in the shootout that ensued.

The story of Lucky John and others titled ‘extrajudicial Killings, story of SARS and robbery suspects’ was written by Juliana Frances and it won the overall prize of the Wole Soyinka Prize for Investigative Journalism in 2014.

According to Motunrayo, the article corroborated many independent reports, including that of Amnesty International and also supported the #EndSARSEndSARSBrutality and #ReformSARS hashtags currently trending on Social Media.

On the part of the Wole Soyinka Centre for Investigative Journalism, right from the maiden edition in 2005 till date, many reports and photos on the subject of police brutality had won the prize.

“The poor welfare and the neglect of members of the Nigerian Police is well known to all. As the cliché goes however, ‘two wrongs never make a right’. Frustrated citizens have taken to Social Media and have promised to move to the streets to protest these aberrations. They have given life to the immortal words of Nobel Laureate, Professor Wole Soyinka ‘the man dies in him who keeps silent in the face of tyranny’. The hashtag#EndSARS may be too harsh, #EndSARSBrutality and #ReformSARS may be more like it. If we take the ‘end it’ advice as a way of resolving our plethora of aberration, there’d be so many things to end, including maybe Nigeria itself.

“Yet the hashtag depicts how deeply people have been affected, Nigerians have had enough. We hereby call on the Federal Government on this World Anti-corruption Day and eve of World Human Rights Day to decisively put an end to these unacceptable continuous corrupt practices and reign of terror. This is one change that must become a reality for the Nigerian people. This harassment must stop, Nigerians deserve more,” she said.

Professor Lai Oso, Chair of the 2017 Judges Board gave the Judges’ comments. He said the entries ranged from very well written investigative stories which made good use of data and statistics to poorly written and pedestrian ones. On the print media he said “it seems the industry is in transition with most entries in that category not necessarily investigative in nature.

He said it appeared much still needed to be done in the continuous education of reporters for them to know that ordinary feature articles were not synonymous with investigative stories.

As for online journalism, he described it as the new kid on the block, although he expressed concerns that it might have gotten carried away by poor judgement. “Most of the online entries are verbose and unrestricted in terms of length.” As for TV, the professor said that there was an urgent need to clearly define investigative journalism and ordinary news reporting.

In spite of these and many more shortcomings, the judges unanimously agreed that the entries for this year are far better than those of last year.

The Professor also acknowledged the seminar role of DapoOlorunyomi, lauding him as an example of what is right in the Nigerian Media.

This year, there was a special prize for Agriculture and Food Security reporting and it was won by Tadaferua Ujorha of Daily Trust. He got a certificate of recognition, an international study tour and N200,000 prize money. The category was supported by Oxfam.

The commended works are entries that are very commendable and deserve a mention. Owners of commended works got N50,000 prize money and a certificate of recognition. In the print category, the winner was Chinwe Agbeze of Business Day. Her story titled: ‘Cheese Balls company where slavery goes on.” She went undercover as a casual worker and exposed how an Indian owned cheeseballs factory where workers are paid 900 naira daily after working for 12 hours in inhumane conditions.

The runner up for the print category was Mojeed Alabi of the New Telegraph who won the award for the same category last year. His story ‘Nyanya blast; Victim’s agonies live on’ focused on the survivours of the Nyanya bomb blast. He won N100,000 prize money and a certificate of commendation.

The overall winner of the Wole Soyinka award for investigative journalism in the print category was Adekunle Yusuf of The Nation who had previously won the award in 2015. His story was about how corruption and favouritism thrived at the University of Ilorin. For his story, he went undercover for four years as a guest lecturer of the school. He won N200,000 prize money, a certificate, an international study tour and a plaque.

For the radio, television and editorial categories, there were no winners.

The commended work in the online category was won by Ebere Ndukwu of Ripples Nigeria. His story was on Governor Aregbesola and ‘the scam called oponimo’.

The runner up for that category was Kemi Busari of Premium Times. His story ‘Corruption, extortion reign at Nigerian Immigration passport office’ details the corruption perpetuated by officials of the Nigerian Immigrations office when it comes to issuance and renewal of the International Passport.

The winner of the online category was Fisayo Soyombo of The Cable. Fisayo had previously won the overall prize in 2016.

The overall winner of the category was Ayodele Ojo of The Sun. His photo ‘law of jackboot’ shows two uniformed soldiers beating up a bus conductor who had refused to allow them board his bus.

The winner of the grand prize, the Wole Soyinka Award for Investigative Journalism 2017 was Adekunle Yusuf for his expose of the corruption at the University of Ilorin.

Professor Soyinka thanked everyone involved in the project. He congratulated all the winners and revealed that the Wole Soyinka Foundation had been collaborating with the Cedar Institute in Lebanon, saying that for next year, some journalists would be sponsored for the trip.