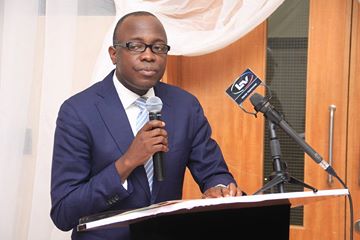 Ashade, who was giving a breakdown of the 2018 budget of N1.046 trillion presented to the House of Assembly by Ambode on Monday, also said the government would borrow N148.699 billion to finance the budget deficit.

“This administration inherited external loans of N468.471 billion which were contracted at an average of N100 to $US1. This balance is made up of some loans that have been running since 1989. Today these loans are being repaid at an average rate of N305 to $US1 translating to 205% increase in the loan repayment rate.

“We have continued to meet our obligations in servicing our debts and paying our loan obligation as and when due. Recently in April, 2017 we repaid bonds of N57 billion which means the current administration have repaid a total loan stock of N187.113billion.  Our commitment to meeting our obligations and impressive IGR have been affirmed by the strong ratings the state enjoys locally and internationally,” he said.

Of the N1.046 trillion budget, Ashade disclosed that the Lagos Internal Revenue Service (LIRS) was expected to generate N440.121bn, equivalent to 61% of the Total Internally Generated Revenue, IGR.

“However, we shall continue to strive to improve on our revenue-to-GDP ratio from current 2.18% level to about 5% or more in 2018, by bringing more people into the tax net, promoting improved filing of returns and self-assessments by taxpayers, and driving fiscalisation of consumption taxes,” he said.

The commissioner also disclosed that the government had proposed N135.815bn on road infrastructure next year, adding that this would include advancement of construction of the flyover bridge at Pen Cinema in Agege; construction of Opebi road-Mende link bridge; dualisation of Lekki-Epe expressway from (Eleko junction); special road intervention in Local Government Areas (“LGAs”)/Local Council Development Areas (“LCDAs”); urban regeneration (including roads and drainage construction) in Victoria Island, Ikoyi, Ikeja and other areas; completion of Oshodi-Murtala Mohammed International Airport road; advancement of construction work on Agric-Isawo-Owutu-Arepo road in Ikorodu, Igbe-Igbogbo Phase II-Bola Tinubu way in Ikorodu; and continuous maintenance of roads across the State,” among others.