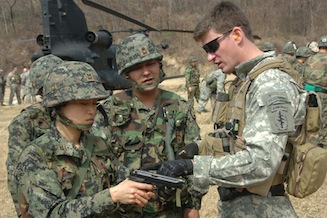 Moscow on Monday warned military exercises by Japan, the U. S. and South Korea aimed at countering North Korea would only raise hysteria and create more instability in the region.

Russian Chief of the General Staff of the Armed Forces Gen. Valery Gerasimov, issued his warning in Tokyo as the U.S., Japan and South Korea began a two-day exercise to practice tracking missiles amid rising tension over North Korea’s weapons programmes.

“Carrying out military training in regions surrounding North Korea will only heighten hysteria and make the situation unstable,” Gerasimov said at the beginning of a meeting with Japanese Minister of Defence Itsunori Onodera.

Monday’s exercise by the U.S. and its two Asian allies, in which they will share information on tracking ballistic missiles, came just days after large-scale drills by U.S. and South Korean forces that North Korea said made the outbreak of war “an established fact”.

On Nov. 29, North Korea test-fired its latest ballistic missile, which it said was its most advanced yet, capable of reaching the mainland U.S.

China has also repeatedly called for the U.S. and South Korea to stop their exercises, which North Korea sees as preparation for an invasion.

Chinese Foreign Ministry spokesman Lu Kang, asked in Beijing about the latest U.S., South Korean and Japanese drills, said the situation was in a vicious cycle that if followed to a conclusion would not be in anyone’s interests.

“All relevant parties should do is to completely, precisely and fully implement the relevant UN Security Council resolutions toward North Korea.

“And do more for regional peace and stability and to get all parties back to the negotiating table. Not the opposite, mutual provocation,’’ Lu said.