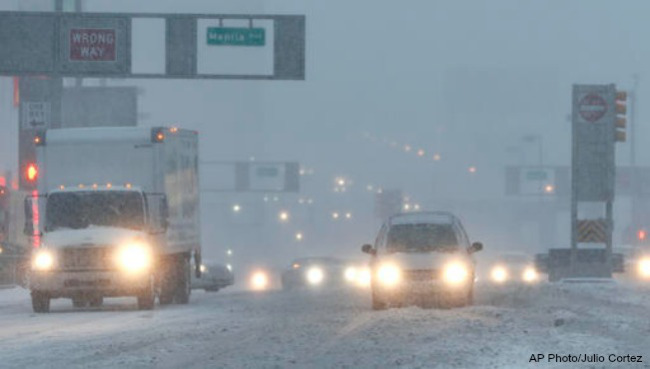 Vehicles drive under a snowstorm as they approach the Holland Tunnel, Thursday, Feb. 9, 2017, in Jersey City, N.J. (AP Photo/Julio Cortez)

A number of flights were delayed and cancelled at the Heathrow Airport in the United Kingdom over a heavy snowfall, the airport’s press service said in a statement.

“Heathrow Airport remains open. However, we regret that weather conditions across the UK are resulting in some passengers experiencing disruption to their travel arrangements.

“Airlines are responsible for ensuring their flights are fully de-iced before they are operated, and this is resulting in some delays and cancellations,” the airport management said.

The press service also called on passengers to check status of flights before coming to the airport.

According to the BBC broadcaster the heavy snow also resulted in power cuts as well as disruption of rail and road travel across the United Kingdom.

Hundreds of schools will be closed on Monday.

The deepest snow (30 centimetres or 12 inches) has been registered in the village on Sennybridge, Wales.