Change mantra made me team up with Buhari - Amaechi 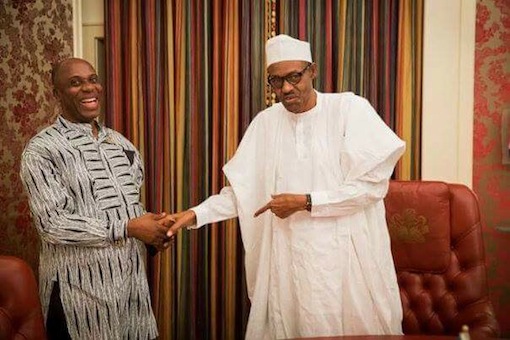 The Minister of Transportation, Mr Rotimi Amaechi, says that his pursuit for change made him to leave his former party, the Peoples Democratic Party (PDP), to join the All Progressives Congress (APC).

Amaechi made the disclosure to the News Agency of Nigeria (NAN) on the sidelines of the Future Awards Africa held at the Federal Palace Hotel, Victoria Island, Lagos last Saturday.

He said that he would have done otherwise by staying in PDP and fight for the change, instead, there was a need to cross over to APC because of his belief in President Muhammadu Buhari.

“I moved from PDP to APC because I am tired of what is happening in the party, I have the option to stay because of my position as the Chairman of the Governors then.

“I can use my position to fight them (PDP) and get what I want because I believe Nigeria was not going in the right direction by then.

“My attention and belief shifted to Buhari which was the viable alternative, I believe in the change mantra because it is the only way to improve on what is on ground.

“He has not disappointed because the economy is now back on track and is growing. This is evident in the current prices of food items because it’s getting lower,’’ he told NAN.

Amaechi said that prices of food would further crash because of the efforts of the government at making the country self-sufficient in food production.

“With the change going on, the price will further crash because before this government came in, the price were soaring because we were importing food items, things we can grow here.

“Now the policy of government is working which banned the importation of rice, the price is now about N16,000, but before now, we are importing about N3 billion worth of rice.

“Before now too, we were importing another N3 billion worth of poultry products, we are importing tomatoes but with the ban, we are now concentrating on our local production.

“Many states in the northern part of the country are now growing rice in large quantities though by right, the South-South geo-political zone should be doing that because they are the ones in the swampy area,’’ he said.

Amaechi said that the wastage in the PDP era was alarming, adding that the depletion of the excess crude account was supposed not have been.

“When Obasanjo was leaving, he left about 65 billion dollars in the Excess Crude Account, but this money was frittered away and we wonder where the money is.

“As at then, the price of crude oil during the president Goodluck Jonathan’s administration hovered around 140 dollars with this, they did not leave anything for the incoming government.

“With that kind of money, we should be thinking of connecting Nigeria through rail system. The rail between Ibadan to Kano would have been completed.

“Also the rail gauge between Port Harcourt to Maiduguri and Lagos to Calabar, but all the excess crude money was frittered away, we need to ask questions,’’ he said.