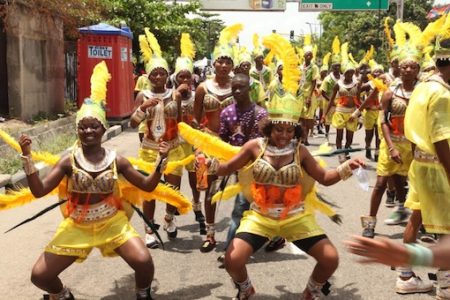 Gettin Jiggy With It: Dance moves that blew tourist away
PHOTO: Emmanuel Osodi

An international artiste, Peter Badejo, has appealed to the Federal Government to institutionalise and invest in the arts sector for the benefits of the country and stakeholders in the industry.

Badejo, an Officer of the Order of the British Empire (OBE) told the news Agency of Nigeria (NAN) in Lagos an an event commemorating his 70th birthday that such an investment would complement meaningful development of the country.

The Platinum Jubilee programme titled: “Shades of Dance’’, was organised by some artistes at the Freedom Park, Lagos.

Badejo, the cultural and dance ambassador for Africa, said that government had to invest in arts and artistes themselves.

“The investment has to be total and not a matter of trying”, he said.

He said the government should develop and follow-up on three aspects of the sector for it to have a proper foundation.

“The sector is not like rice that can be harvested from the farm, polished and sell. Even when rice is polished, its products are usually well packaged for it to attract good price.

“So, the sector needs to be developed; it needs to be supported and we need to invest in arts and artistes for it to be meaningful and bring gains to the country,’’ he said.

The dance ambassador said that the public should show special interest in the sector to appreciate what it could contribute to national development.

He said that it was only those that were connected to the sector that really understood its importance.

“Until you value what you have, I do not think you can make any sense out of it.

“That is why the government and people in government should recognize it through holistic investment,’’ he said.
Badejo said he counted himself lucky to have attained 70 years.
“I have to give gratitude to God in this profession that I am in, the arts profession, and specifically, dance.

“I have so many brothers, sisters and friends in the business, who have flair for the arts and who respect me.

“We share one love and that is why today was made possible,’’ he said.

“We did one in Osogbo, Osun , where artistes from Oyo and some other places came together to honour me.

“Then, this Lagos one is amazing: the preparation and the main event featuring different artistes, as well as non- artistes coming together to honour me.

“ People just come to celebrate life with me,’’ he said.

Badejo studied dance at the postgraduate level at the University of California, Los Angeles. He is one of Nigeria’s foremost choreographers, dancers and one of Africa’s performance specialists.

After Badejo’s meritorious career in Nigeria and in the United States as a performer, director, teacher and academic, he relocated to Britain in 1990.

In 2013, at Finsbury Town Hall, London, the Association of Dance from the African Diaspora (ADAD) awarded Badejo a Lifetime Achievement accolade for his contribution to the development of the practice of dance of the Africans in the Diaspora in the UK.

Badejo’s area of specialization has been at the leading edge of the contemporary African cultural performance, transmitting and transforming the African dance and traditions through the use of the Yoruba Bata dance style.