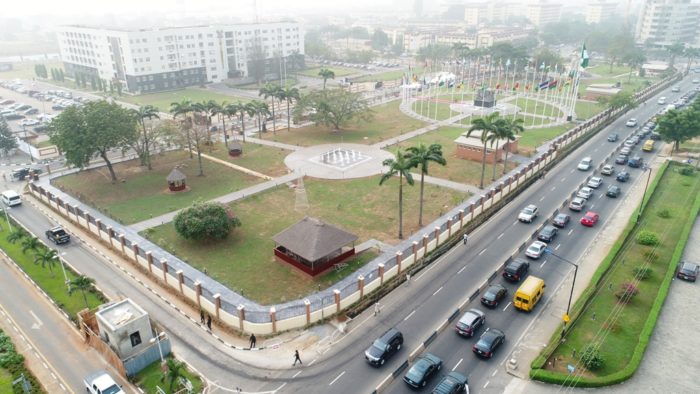 he Johnson Jakande Tinubu (JJT) Park during the opening at Alausa, Ikeja by Governor Akinwunmi Ambode on Wednesday.

Ambode, who spoke at a ceremony to unveil the park known as Johnson, Jakande, Tinubu Park (JJT Park) and located in front of the State House of Assembly and a few metres away from Lagos House, said it was part of efforts by his administration to immortalise heroes who worked hard for the emergence of Lagos as not only the Centre of Excellence, but also one of the most prominent City States in Africa.

He said the three former governors were outstanding in their contributions to the development of the State and wrote their names in the sands of time, especially during their time in office.

Ambode said: “One of the hallmarks of any progressive society is to always recognise and reward the efforts of heroes who contribute to the growth of that society. In the case of Lagos State, we have so many heroes who toiled and laid a solid foundation for the Lagos we enjoy today.

“Today, we are here to celebrate and honour three past governors of our dear state who were outstanding in their contributions to the development of Lagos Sate. These eminent Lagosians are some of the very few brave men that stood to be counted on the side of justice and even by their performances while in office have written their name in gold for future generations.”

“The roles played by Brigadier Mobolaji Johnson Rtd., the First Governor and Military Administrator of the State; Alhaji Lateef Jakande, the First Civilian Governor of Lagos State; and Asiwaju Bola Ahmed Tinubu, Governor and Architect of modern Lagos; can never be forgotten. They are the true legends of our State, and architects of the Lagos we are proud of today.”

Going down memory lane, Governor Ambode said Brigadier Johnson, laid the foundation as the pioneer Governor of the newly created Lagos State in 1967 and constructed the 60.7-kilometre Lagos–Badagry Expressway linking Nigeria with countries in the West African sub region, the Itoikin Bridge linking Epe and Ikorodu; the Eko Bridge and a network of roads and bridges that opened up the new Lagos.

Ambode added that apart from the successful implementation of the Free Education Programme, Alhaji Jakande’s administration also established new neighbourhood Primary and Secondary schools, and also constructed over 30,000 housing units indifferent parts of the State for the benefit of low income earners.

“His tenure also witnessed the completion of the General Hospitals in Gbagada and Ikorodu as well as the establishment of about 20 health centres within the State. Alhaji Lateef Jakande conceived and initiated the Metro line transit system that would have provided a solution to the challenge being experienced in the transportation sector today,” he said.

The Governor while describing Asiwaju Bola Ahmed Tinubu as the architect of modern Lagos, said his tenure witnessed the development of a blue print for the future development of the State and which successive administrations have continued to build upon and actualize today.

“One of the remarkable achievements of Asiwaju Bola Ahmed Tinubu’s administration was the reform of the State Tax administration system which resulted in the State attaining the status of the most viable and self sustaining State in Nigeria. He also made huge investments in education and initiated new road constructions, required to meet the needs of the fast-growing population of the State.

“Asiwaju also established the institutional framework which ensured that the State was properly and efficiently run. It was under Asiwaju’s government that institutions like LIRS, LAMATA, LASTMA and many others came into existence,” Governor Ambode said.

Presenting plaques of honour to representatives of the three former Governors, the Governor said his administration decided to honour the trio while they are alive, just as he expressed optimism that the Park would serve as a constant reminder of their sacrifices and the need to protect and preserve their virtues and what they stood for.

“More importantly, it will serve as a reminder and a source of inspiration for leaders who would have the honour and privilege to occupy the seat that was once occupied by these great men of history.

“On behalf of the government and the very appreciative people of Lagos State, I want to say a big thank you to these living legends for their sacrifice, commitment, dedication and passion for the growth and development of Lagos State. You will continue to be remembered and celebrated by men, women, and children, young and old from any part of the world who step into this garden which has been dedicated to you,” Governor Ambode said.

Earlier, in her welcome address, General Manager of the Lagos State Parks and Gardens Agency (LASPARK), Mrs. Bilikis Adebiyi-Abiola said the park aside being strategically located showcases the State Government’s resolve to make parks available for recreation, for relaxation as well as social events.

She said it was also a testament that Governor Ambode has placed a high premium on the quality of life of Lagosians, adding that the Government was poised to capture more degraded areas for beautification and landscaping projects.

She said the JJT Park, which occupies a total land area of approximately 21,880sqm, among other things, has two waterfalls, a children’s playground and free Wi-Fi access.