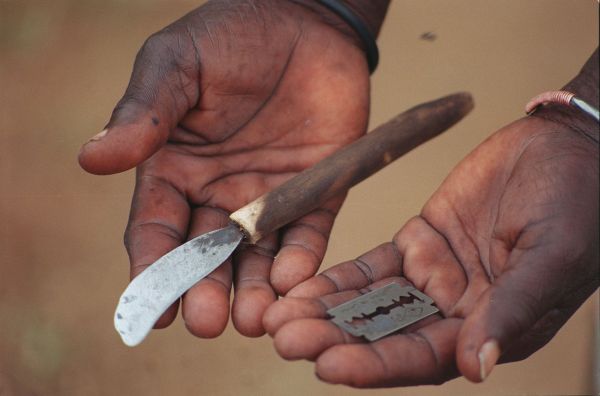 Zainab Shola at first meeting will strike you as a happily married woman in her late-twenties; a full housewife.

As a teenager in secondary, she discovered that the flow of her monthly periods was not consistent and inside of her, she usually felt itchy and uncomfortable.

Medical examinations showed that the scar she had as a result of female genital circumcision that was performed on her as a child was responsible for the condition.

Shola later discovered that she was unable to engage in sexual intercourse because of the scar and no penis could penetrate her vagina. She was scared of getting into a relationship.

However, shortly before her wedding, she found a good team of doctors that were able to perform surgery on her vagina to widen the opening; the surgery was partly successful.

While she could now engage in and enjoy sex, she would only be able to give birth through Caesarean Section, and never through the vagina or natural delivery.

34 years old Bukola Owolabi, a businesswoman, married with two children, her ordeal started on her 13th birthday.
Her 20-year old sister, Korede, had come and told her they were going to visit some relatives.

On getting to their destination, some elderly women came out to welcome them enthusiastically and ushered them into a living room.

Korede was later taken to another room; there, she saw some small bowls of water, a white sheet of cloth and mat on the floor, blade, towel, cotton wool and some other mixtures.

In the room were three women; she was asked to strip. In a state of confusion and innocence, she complied.

Narrating her ordeal, she said: “I was told to lie on the floor and two of the women firmly gripped my legs down.

“From that moment, it was one of the most unimaginable and excruciatingly painful moments of my life; the eldest of the women cleaned a blade and very small sharp knife.

“They opened up my legs wide and in a twinkle of an eye, I felt this sharp excruciating pain down my vagina; I let out piercing screams and the ground started moving round.

“After the procedure, I was told that I have just been circumcised, that I am now a woman; the women took turns to explain the implications and reasons to me.

“Cutting off some parts of my clitoris is cultural, a rite of passage and it will also make me not to be promiscuous.

“But, they never told me some of the accompanying negative effects; now, I quarrel with my husband over sex, I loathe having sex; it is not pleasurable and it is almost always a painful duty”.

These are some of the untold painful experiences women go through after genital cuttings, and they often carry grave health implications.

The World Health Organisation (WHO) says that Female Genital Mutilation (FGM) includes procedures that intentionally alter or cause injury to the female genital organs for non-medical reasons.

It involves the removal of part or all the female external genitalia; they could be done with native knives, blades or even by consistently rubbing the clitoris with lubricants such as vaseline or shea butter known to many as “Ori’’.

The practice is mostly carried out by traditional circumcisers, who often play other central roles in communities such as attending to childbirths.

WHO also identifies four different types of female genital cutting recognised internationally as a violation of the human rights of children, girls and women.

This practice, which also violates a person’s rights to health, security and physical integrity, is a procedure that has no health benefits for girls and women.

According to a UN report, Nigeria accounts for about a quarter of the 125 million cases identified worldwide.

Oyo and Ekiti states have the most prevalence among the five states with the highest number of FGM cases in Nigeria.

Yet, experts say that this common practice has no health benefits.

Dr Charles Agugwa a gynaecologist, says “FGM which is the removal or damaging of the normal female genital tissue can lead to complications.

“The procedures can cause severe bleeding, menstrual and urinary problems, cysts, infections, sexual challenges as well as complications in childbirth and increased risk of newborn deaths”.

Also, Adanna Oti, a gynaecologist at Wuse General Hospital, Abuja, said infertility could occur as a result of the infection contracted during female circumcision.

According to her, the act is usually done with unsterilised equipment that was used for more than one person, thereby predisposing victims to infections.

“With infertility caused by such infections, they can only get pregnant through In Vitro Fertilisation.

“The circumcised child may even have problems of what we call `hidden menstruation’, and because the place is already blocked or closed, the bleeding will not flow as it should,” he said.

Oti said the effects of FGM could cause pain to women during labour and child delivery.

He said that the vagina and vulva were made of soft tissues to reduce injury during delivery as they expand for the baby’s head to pass through.

“The scarred tissues can cause tear during childbirth with a lot of bleeding. Some of the tears may even go into the rectum.

“When this happens, you have to suture them and the woman may have what we call recto-vaginal fistula, also called obstructed labour,’’ she said.

Oti said that FGM was still common in Nigeria, especially in the southern part, noting that even educated parents still carry out this act on their children using modified methods.

“We may not be doing the very worse types such as the ones they have in Sudan and Ethiopia, where they cut and suture the genitals.

“What most people do now is that instead of cutting, they use their thumb to gradually press in the baby’s clitoris to blunt it because at that time the child’s cells are very fragile,’’ she said.

Dr John Oma, a psychologist, said the process of FGM puts the female through psychological pain and trauma.

“It leads to decreased sexual enjoyment and psychological consequences, such as post-traumatic stress disorder, low self-esteem, anxiety and depression.

“There are also lots of unaccounted deaths arising from FGM or circumcision,’’ he said.

Oma said that FGM and the absence of the full clitoris could cause painful sex and disharmony in marriage.

“Some people may eventually have the need for surgeries later in life.

“This is especially if the FGM procedure seals or narrows a vaginal opening, the Type 3 Infibulation needs to be cut open later to allow for sexual intercourse and childbirth,” he said.

“Circumcision makes the vagina have scars after healing which can make it tighter and inelastic.

“During sex, the woman is likely to sustain injuries which can predispose her to HIV and other infections.

“There are also lots of unaccounted deaths arising from FGM or circumcision,’’ she said.

Lawal advised mothers to stop FGM as there were many health implications which could affect the girl-child later in life.

She also called on the government as well as medical and health practitioners to educate the public on the dangers of FGM.

“The elimination of FGM is a specific target under Goal 5 of the Sustainable Development Goals; FGM was outlawed by the United Nations in 2012.

“By the virtue of the Violence Against Persons Act 2015, signed into law during the last administration, it is a punishable offence in Nigeria.

“From the infection, infertility, HIV infections to marital disharmony and sexual dissatisfaction, the effects are quite devastating.

“There is no single benefit in the practice of female genital mutilation; yet, the practice is high even among the educated,” she noted.

Lawal also said aside from the immediate risks of FGM which includes haemorrhage, infections, and death, survivors of FGM were liable to present later in their lives recurring urinary tract infections.

“They are also at risk for several adverse complications for both mother and newborn during childbirth.

“These people who still practice FGM claimed that it is a social expectation that most be carried out and that it cannot be stopped,’” she said.

Lawal urged state governments to enact laws that would prohibit FGM in their states, insisting that the states could domesticate the Violence Against Persons Prohibition Act (VAPP) of 2015.

Stakeholders in health sector hold the belief that eliminating FGM will go a long way in improving sexual, reproductive and maternal health.