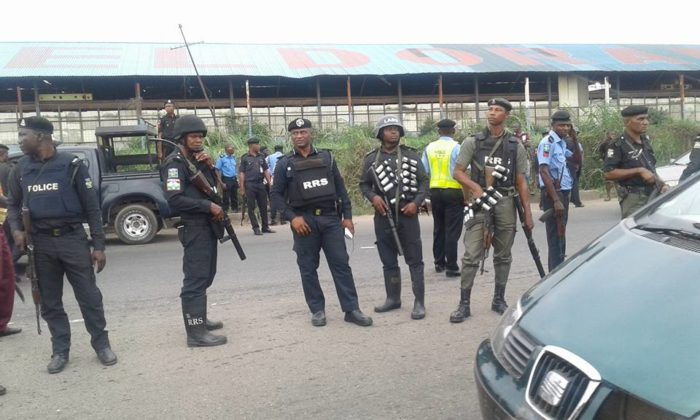 Police officers at the scene

The Police Command in Kebbi, said on Thursday that it had rescued two boys from suspected kidnappers who demanded N2.5 million ransom from their parents, resident in the state.

The state Commissioner of Police, Ibrahim Kabiru, told newsmen in Birnin Kebbi that the boys, aged 10 and 11 were rescued unhurt in Dakinkowa of Kontagora in Niger State.

Kabiru said that eight suspects had been arrested in connection with the abduction and no ransom was paid before the boys were rescued.

He said that on Dec. 5, one Christopher Nnagbo of new prison area, Birnin Kebbi, reported at the Divisional Police Headquarters, Birnin Kebbi that his son, 10, had been missing since Nov. 30.

He said that the boy was on his way home from Anglican Church, Birnin Kebbi when he was abducted.

“On the 5th of Dec., a hidden number called the victim’s mother, Mrs Angela Christopher with a view to negotiating for ransom and demanded N2.5 million before the child could be released.

“On receipt of the report, the police swung into action. The principal suspect was arrested and the victims rescued,” Kabiru narrated.

He said the second boy was also rescued along with the victim.

“Effort is now underway to locate the parents of the second boy who was rescued in the operation,” he said.

The commissioner said the victims were immediately taken to Federal Medical Centre, Birnin Kebbi, for necessary observation and medical treatment.

According to the police commissioner, the principal suspect said he was pushed into the act by the desire to settle his debt.

Kabiru advised against people borrowing more than they could repay to avoid similar incidents.