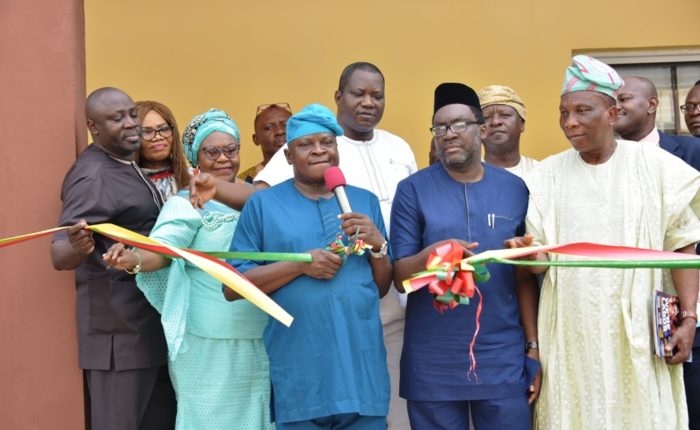 Lagos State Governor, Mr. Akinwunmi Ambode on Friday commissioned the newly upgraded Bagauda Kaltho Press Centre in Alausa, charging journalists to continue to ensure professionalism in the discharge of their duties at all times.

Ambode, who performed the commissioning at the Press Centre, located within the Alausa Secretariat, charged journalists to continue to dedicate themselves to the tenets of their profession by being factual so as to sustain the credibility of the media in Nigeria.

Represented by the Commissioner for Commerce and Industry, Mr. Rotimi Ogunleye, the governor said his administration remains committed providing conducive environment for journalists to practice their profession in line with global standard.

“This administration has taken steps to ensure that the Bagauda Kaltho Press Centre is upgraded, in terms of physical infrastructure and the facilities so that our media practitioners can work in an environment that is in tune with global standard,” Ambode said.

He said the upgrade of the Bagauda Kaltho Press Centre was in line with his administration’s believe that journalists should be empowered to perform their duties maximally just as he disclosed that in the coming year, the LTV/Radio Lagos/Lagos Traffic Radio complex would be transformed into a veritable Media Centre of Excellence.

“I want to assure you that this administration would continue to make the environment conducive for journalists to practice their profession. In the various information centres in the divisions in Epe, Ikorodu and Badagry, the government will soon start the upgrading of those centres so that they would be in tune with the Bagauda Kaltho Press Centre.

“These efforts are being taken by our administration to show that we believe in information management, we believe that as we work assiduously in this part of the divide, the public is adequately informed about goings on in government and about the plan it has to continue to deliver the dividends of democracy.

In his remarks, Commissioner for Information and Strategy, Steve Ayorinde said the transformation of the facility, 20 years after it was built was to reflect Ambode’s style and standard of governance and also to sustain the honour of Bagauda Kaltho, a Senior Correspondent with The News Magazine, who was killed in 1996 in the line of duty.

In their goodwill messages, three former Chief Press Secretaries, Mr. Sina Ogunbambo, Mr Segun Ayobolu and Mr. Kehinde Bamigbetan recalled their experiences while in office and lauded the initiative by Ambode and efforts of his media team to the welfare of journalists covering the activities of the state government.