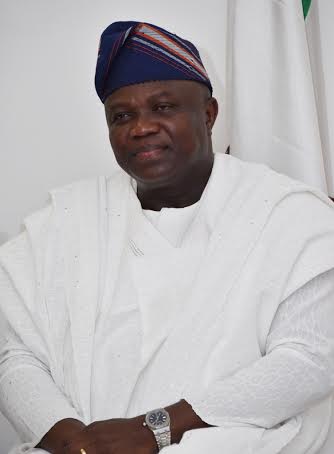 A few days ago, the Lagos State Government held the 11th Town Hall Meeting on Security which coincided with the 10th anniversary of Lagos State Security Trust Fund (LSSTF). At the event which took place at the new Banquet Hall at the Governor’s Office in Ikeja, Lagos, Skye Bank Plc and six other companies were commended and awarded platinum prize for committing huge resources in support of securing lives and property in Lagos State. The six other companies are; Zenith Bank Plc; First Bank Plc; United Bank for Africa (UBA); Access Bank Plc; Dangote Group and MTN Foundation. These companies have committed over a quarter of a billion each over the last decade to the LSSTF.

At the event, key stakeholders commended the LSSTF initiative while asserting that it has helped in no small measure to address the state’s peculiar security situation through prompt provision of necessary professional and logistical supports for the various security agencies in the state to operate seamlessly. Being the commercial nerve centre of Nigeria, and indeed West Africa, Lagos has its peculiar security challenges. Its sheer human density driven by an increasing population due to endless survival and economic driven immigration makes it naturally attractive to criminal activities. But the coming of the LSSTF, the first of its kind in the country, seems to have really assisted in swiftly addressing some the state’s most critical security concerns.

It will be recalled that on 3rd September, 2007, the Lagos State government established the LSSTF as a public-private partnership framework for mobilizing and providing equipment and resources for effective operations of security agencies in the state. The LSSTF was a practical response to the reality of the operational deficiency of the various security agencies within the state, particularly with respect to funding and provision of modern equipment.

With the realisation that the huge demands of security can no longer be met by government alone, the LSSTF is primarily conceived to institutionalise an enduring public/private approach to security challenges in the state. The law setting up the Fund provides for the structure, funding, decision making and accountability procedures for the Trust Fund. The main goal of the Trust Fund is to provide money for the acquisition and deployment of security equipment and such human, material and financial resources as shall be found necessary for the effective functioning of all Federal, State, Local Government and other security agencies operating in the State and part of the Fund shall be reserved for the training and retraining of security personnel.

The LSSTF comprises a Board of Trustees headed by a Chairman while the day to day administration of the Fund lies in the hand of a Chief Executive who is designated Executive Secretary and his main mandate is to execute the decisions of the Board. The Executive Secretary and all members of the Board are all appointees of the State governor and they are to serve for fixed terms as provided by the Fund’s enabling Law. The monies and assets of the Fund comprise voluntary donations by the Lagos State Government, Local Governments, the Organised Private Sector [OPS], the Informal Business Sector [IBS] and private citizens.

The Board of Trustees ,among others, solicits for and receives donations to the Fund, reviews the financial status of the Fund from time to time, liaise with relevant security officials such as the Commander of the Police, the Director of the State Security Service [SSS], etc, receives security reports from the Commander of Rapid Response Squad [RRS], and other vital security agencies, advises the governor on the security needs as advised by the police and receives and reviews proposals on supply and maintenance of security equipment, training, communications, etc.

Without a doubt, the setting up of the LSSTF is another laudable initiative from a State renowned for its several pace setting feats and it has really helped to provide creative strategy for the state’s diverse security concerns. With regular provision of training and critical security equipment such as surveillance helicopters, operational vehicles, motorbikes, arms and ammunitions, patrol boats, Armoured Personnel Carriers among others crucial operational needs to relevant security agencies in the state, crime rate in the state has, no doubt, been on progressive decline in the last 10 years. Consequently, most hitherto notorious areas in the state have become safer for the citizens to carry out their lawful daily activities without any fear.

For a Mega city like Lagos State, the Police-Personnel Population ratio of 1- 400 in a State with estimated population of about 24 million is considered a big security issue that must be the concern of well-meaning Nigerians. Hence the LSSTF envisioned more highly trained men and women working with modern logistic support, with effective cooperation and collaboration with other stakeholders. Pursuant to this, the LSSTF have been investing hugely in the empowerment of the various security agencies in the state.

It should be stressed that every investment on public security by any government is a priceless one. Universally, security is the most essential duty of any government. This is quite understandable. Insecurity leads to chaos and anarchy which ultimately undermine every genuine effort to transform the society. Therefore, public security remains a primary duty that any government is obliged to offer to all of its citizens on equal basis, irrespective of class, wealth, position, tribe, religion, or any other such classifications. The main goal of public security is to ensure the protection of the citizenry against all activities that could endanger lives and properties.

The public security status of any government is ultimately an indicator of its public acceptance. This is because public security is one of the most prominent factors that determines good governance and guarantees the extent of socio-economic growth and development. The lack of viable public and safety mechanisms in any given society makes sustainable socio-economic development a very difficult task. It is in the light of this that the Lagos state government Security Trust Fund enterprise remains an ingenious scheme which should be supported by every well meaning organization and individuals in the state.

It is, however, important to call on every segment of the society to support the state government and all security agencies so as to enhance public safety in the state. An effective public security cannot be obtained without the active involvement, participation and support of every section of the society because public security is the responsibility of all individuals, groups, communities, organisations and other units that constitute the state.

Criminals are not spirits, they dwell in our midst. We must, therefore, observe and report every strange movements and activities in our neigbourhood to the appropriate authorities. It is only when we develop a communal fortitude towards public security that the huge investment of the state government and other stakeholders in the state on public security could be effectively harnessed.