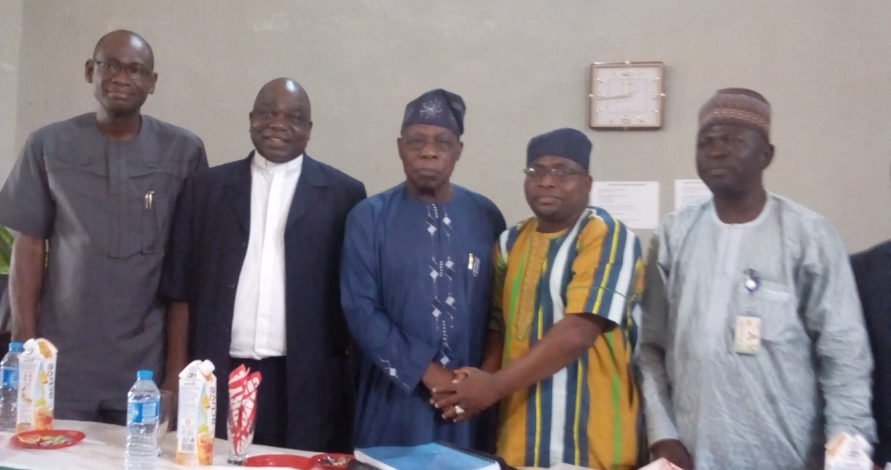 Obasanjo and his supervisors and examiners after the grueling interview

Former President Olusegun Obasanjo was on Friday pronounced worthy and competent for the award of Doctor of Philosophy (PhD) in Christian Theology after 163 minutes robust defense of his voluminous thesis before a six–man panel.

The degree is awarded to Obasanjo by the Department of Religious Studies, Faculty of Arts of the National Open University of Nigeria(NOUN), Abeokuta Study Centre, Ogun State.

Asked by Dr. Samaila Mande, who chaired the panel, to justify in a nutshell why he should be awarded a PhD degree of the institution, Obasanjo said he had put in “enough study” and “intellectual rigours” to produce his work based on diligent guide and supervision from his teachers and supervisors.

And speaking on behalf of the Panel at the end of the final defence, Dr. Mande said Obasanjo has satisfied the requirements and thus qualified for the award of Doctor of Philosophy degree in Christian Theology of NOUN.

Mande said it was a thing joy to him as the ex – President happened to be one of the pioneer students to bag PhD in Christian Theology under his management, expressing the confidence that the feat would be well celebrated during the NOUN convocations.

The ex- President whose matriculation number reads NOU 146058901, submitted the thesis to his department as part of the requirements for the award of a Doctor of Philosophy degree in Christian Theology.