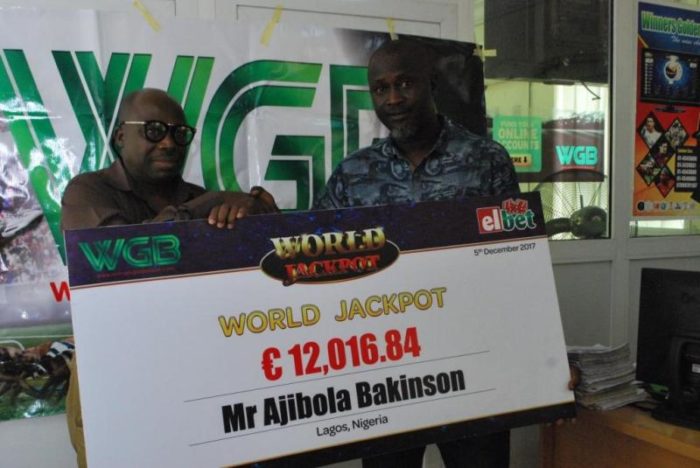 He was presented a cheque by the company’s Executive director, Mr Olabanji Sulaiman at WGB office at 9a, Balogun Street, Alausa, Ikeja, Lagos, on Tuesday.

It was reliably gathered that the 44-year-old played the game with N50 without an inkling that he was going to win a jackpot because he lost on the lucky ball game but won on the jackpot.

According to him, “I was about eating at the canteen when I was called that I won. Could you believe I lost appetite immediately because of excessive joy? It is still like a dream to me until I lay my hand on the cash”, he said.

“Anytime a stalker wins, no matter how much you win, you are always happy. It is still like a surprise to me. I do have the feeling that there will be a lucky day for me but I never knew it was going to be like this.

“In fact, when I wanted to play the game, I was like this December, things are usually tight but thank God I risked the lucky ball game. The game is like a jackpot. When you win, at times it comes back in double winnings, it’s like double the money you were supposed to win and if it falls on World jackpot, its huge and that was what happened in my case, even the ticket that was not a winning ticket for lucky ball games yet the ticket qualified as a jackpot-winning ticket for me, I almost threw the ticket away.

”Out of 48 balls with numbers drawn, I chose 6 balls and luckily for me, they were lucky numbers that fell on Global. Am always like there is a spirit inside the game which usually say amen to peoples game,” he said.

According to WGB’s AGM Marketing, Mrs Patricia Popoola, the World jackpot is not an everyday game, adding that such drops once in a while.

“If it were to be the usual game, he would probably be aiming at a good amount of money but luckily, his game fell on world jackpot that is paid in Euro. It was his lucky day and he won big,’’ she said.

Popoola said the company has no problem paying the winnings in foreign currency (EURO), adding that such big winning is not new to the organization even when it is not the jackpot game people still win big”, she said.

In a related development, two other winners, a 40-year-old civil servant, Peter Amaehule and Christopher Obinna Ndigwe equally emerged in Port Harcourt, Rivers state in sports Betting (Champions League); both won N5.2 million each. Ndigwe while speaking with our correspondent said his wife who gave him the N500 (ticket ID: 121074889) he used to play the game scolded with him that he’s fond of wasting money playing the game and not winning.

According to him,”I had no more on me and asked my wife to borrow me N500. Instead, she scolded me and warned me not to be wasting money playing the game again. Fortunately for me, I won N5.2 million.”

An elated Amaehule who played the game with N100 (ticket ID: 121073982) and won N5.2 million as well, expressed happiness and was short of words when interviewed by our correspondent.