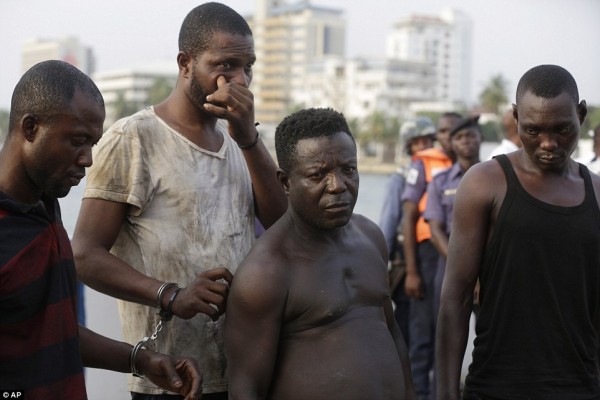 Some suspected oil thieves arrested by the Nigerian Navy

The Nigerian Navy says it has recovered 1,330 jerry cans filled with petrol during a raid on oil thieves in Atlas Cove Island in Lagos.

The Nigerian Navy Ship (NNS) BEECROCT Commander, Rear Adm. Maurice Eno, told journalists on Saturday night that the product was evacuated from a storage facility in Ilado/Idimangoro area of the island.

According to the naval chief, the petroleum product was stolen from vandalised NNPC pipelines on Atlas Cove Island.

Eno said that no person was found at the storage facility during the raid.

He said that the navy monitored activities in the area for about three weeks to ascertain the veracity of the information.

“On December 14, at about 8.10 a.m., a detachment of personnel from the NNS Beecroft raided the locations and discovered a storage facility having over one thousand five hundred jerricans.

“1,330 of the Jerricans contained product suspected to be premium Motor Spirit(PMS) believed to have been siphoned from the Nigerian National Petroleum Corporation (NNPC) pipelines laid on the island.

“At the time of the raid, no person was found on the storage facility,” he said.

“The team also discovered the siphoning points where valves were connected by the vandals to steal the product.

“It is pertinent to note that NNPC pipelines laid on Atlas Cove Island are under the supervision and care of Top Line Security Limited/Kings Guard Security Company.

“It is obvious that these acts may not have gone unnoticed by these private security outfits,” he said.

Eno said that the navy was committed to assisting the NNPC in dealing with pipeline vandalism and crude oil theft.

“The navy is using this medium to warn pipeline vandals and other criminal elements particularly in our maritime environment to desist from nefarious activities and pursue lawful means of livelihood,” he said.

The News Agency of Nigeria (NAN) correspondent who visited Atlas Cove Island on Satutday reports that several items used by the vandals in siphoning petrol from NNPC pipelines were found in the area.

Villagers in the community refused to speak on the incident.

The navy said the jerry cans filled with PMS products would be handed over to the NNPC.