Many feared dead as train falls on US motorway 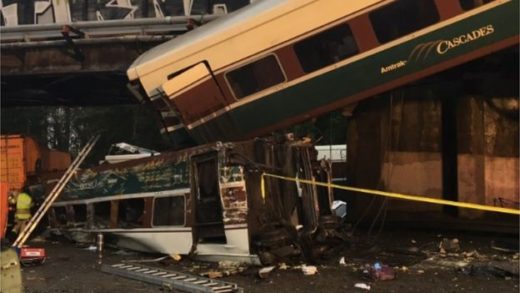 Train carriages have plummeted on to a motorway in Washington state, causing “multiple” fatalities, police say.

The train derailed and the carriages fell on to the I-5 highway below.

Images from the scene show emergency services treating people on the ground. It appears that at least four carriages have left the track; one of them is upside down on the highway, BBC reports.

Several cars on the highway were struck by the derailed carriages, the Pierce County Sheriff’s department says.

Sheriff department spokesman Ed Troyer has told local media that there are fatalities and people still trapped on the train.

Among motorists caught up in the incident there were a number of people injured but no one killed, the department said.

The incident happened near DuPont, which is southwest of Tacoma.

The was the first time an Amtrak train carrying passengers southbound had run on a new section of track running parallel to I-5, called the Point Defiance Bypass.

The National Transportation Safety Board is investigating.