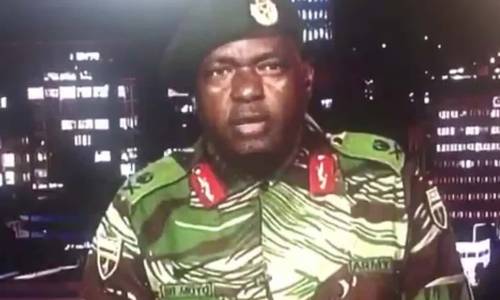 The Zimbabwe Defence Forces (ZDF) on Monday announced the end of their military intervention that culminated in the resignation of former President Robert Mugabe on Nov. 13.

“The Defence and Security Forces, come before you, once again, to pronounce the end of Operation Restore Legacy today, the 18th of December,” said Sibanda, who was flanked by other senior members of the security forces.

The military said it launched the operation on Nov. 13 with the aim of removing criminals that were surrounding the former president.

The intervention eventually culminated in the resignation of Mugabe on Nov. 21.

Sibanda said some of the criminals had been accounted for while others had skipped the country.

He urged the nation to remain vigilant and report any suspicious objects and individuals, saying some members of the G40 faction that was aligned to former First Lady Grace Mugabe were bent on harming peace and tranquility in the country.

The ZDF also urged the police to discharge their duties in accordance with the constitutional mandate and members of the public to respect, support and cooperate with the police.

“As Operation Restore Legacy comes to an end, it is our hope as your Defense and Security Services that our people will remain united, shun corruption, be law-abiding, and focus on working hard for the development of our country,” Sibanda said.

The ZDF also urged the nation to uphold peace and ensure next year’s elections are held in an environment of peace and tranquility.