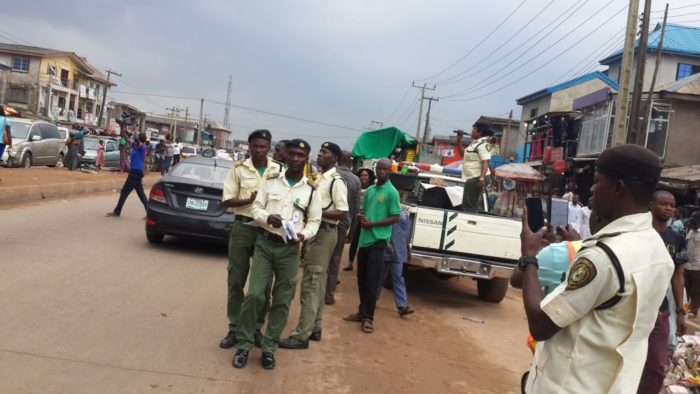 Operatives of the Ogun Traffic Compliance and Enforcement Corps(TRACE)

Ten passengers in a commercial bus travelling to Ibadan in Oyo State were confirmed dead in an accident when the bus collided with a truck on Abeokuta/Ibadan Road in Ogun.

Akinbiyi said that the truck driver only sustained an injury in the accident.

He said that the incident occurred around 8.00p.m on Tuesday, adding that speeding and negligence on the part of the truck driver caused the accident.

“The truck with registration number BDG 7I4 XE was coming from Ibadan inward Abeokuta, while the Toyota Litace marked EKY I85 XH was travelling to Ibadan outward Abeokuta.

“Due to speed and negligence on the part of the truck driver, it had head-on collision with the bus, leading to the accident that claimed the lives of all the passengers on the bus.

“Eleven people were involved in the crash; two females and eight males died in the accident, while the driver of the truck was the only one injured,” Akinbiyi said.

The TRACE spokesman said that the corpses of the victims had been deposited at the Adeoyo Hospital Morgue in Ibadan, while the injured was receiving treatment in the same hospital.