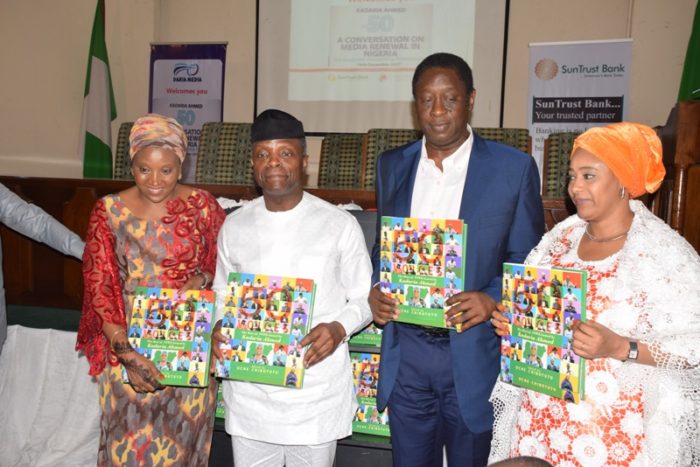 L-R: Kadaria Ahmed, Prof. Osinbajo, Wale Babalakin and a guest at the event

Just over a  month after the state of journalism in Nigeria was appraised at an event in honour of quintessential journalist and one of the founding editors of TheNews, PM News, and Tempo Magazine,  Dapo Olorunyomi, the subject was again discussed on Saturday, December 16.

The occasion, marked with a conversation on media renewal in Nigeria and a book/scholarship presentation, saw the Vice President delivered the keynote address. Though he arrived late because of other state business, Professor Osinbajo made it worth the wait for guests with his insightful analysis of the Nigerian media and suggestions for improvement, going forward.

He began by highlighting well-known facts about Nigeria’s mainstream media, including its vibrancy and resilience. “Nigeria’s press has always been one of the most vibrant in the world; no matter the clampdown on the press in Nigeria, there would always be a prominent group of journalists who would refuse to be cowed; who would use everything at their disposal to hold the authority accountable,” he said adding that the country’s elites have always understood the power of the press.

Professor Osinbajo also mentioned the greater access to information and freedom of expression currently prevalent as well as the explosion in technology.

For him, the media’s Achilles heel is its lack of vision and ingenuity, especially in the face of dwindling circulation and the disruptive influence of technology. He, in fact, refused to blame the declining fortunes of the press on the internet or social media.

“This decline was already taking place long before the internet or social media became so prominent in our daily lives. Elsewhere in the world, the press is one of the custodians of collective societal memory. The press has always been there to remind us of what has gone by so that we can sort of reflect on what’s happening today. But I’m not aware that there’s any online Nigerian archive, for example of news stories, from even, say, 1999. Meanwhile, in other parts of the world, there are archives dating back several decades available as public reminders of the twists and turns of ongoing events and all that.

“It’s important that we bear in mind that some of these, if you like, services that the press ought to render, is not there for various reasons, the strongest being financial challenges. But you may not be able to blame financial challenges for the absence of archive because every time you talk about, especially some of these services that ought to be rendered, you hear there’s just isn’t any money. If anything, the blame should rest squarely on an absence of vision; for a lack of understanding of the media’s role in the society. I think we should be more visionary about these things.

“Even more interesting is that perhaps some of the challenges the media is confronted with could be solved by a return to basic principles; to the rediscovering and understanding of our place in the society. And I happen to think that a number of Nigerians, not to talk of foreigners, researchers, analysts, will even pay a premium for a properly organized newspaper, radio or TV archives dating back at least 15 decades.”

Staying with the issue of financing, Osinbajo said: “It’s heartbreaking that it’s become almost acceptable for media houses in Nigeria to treat the salaries of their journalists as optional items in the grand scheme of staff welfare. It’s now accepted that a journalist who’s able to afford a decent existence either owns the medium, has another job where his income comes from or has learnt to be innovative with being a journalist.

“You are forced to ask the question why should a newspaper or TV station that owes salaries hold to account a state government that‘s guilty of the same. Why would you question those who owe salaries?”

Before proceeding to share his thoughts on media renewal, the Vice President admitted that the media landscape has changed and that it would be “unforgivably presumptuous to define and interrogate the press today in terms of mainstream media.” He acknowledged the emergence of social media as well as the internet underworld where it is possible for an author to circulate materials and hide his/her identity.

The press, the Vice President then submitted has had to deal with the same circumstances that undermined virtually every institution in the country in the last few decades. “For example, the crisis of corruption and lack of integrity is systemic; every institution is infected,” he said while highlighting similarities between the press and judiciary where corruption is rife.

“We are dealing with a crisis of enormous proportion in our society and we are in many senses abnormal when it comes to that,” Osinbajo warned, adding that the press must brace up as society’s conscience by asking hard and uncomfortable questions from individuals and institutions.

“The press must be active; it must continue to hold people to account even where our justice system is slow. The press must hold people to account so that we would never go this path again. “We are at a point where outrage at wrongdoing is severely low. The press and the media as crusaders for justice or against corruption, just see it as a vintage matter. It’s my respectful view that influencers, because of the big role that they play, must set bigger targets. Our society requires addressing big issues; the important thing, of course, is staying the course of those big issues long enough, focus on the issues. Influencers and the press owe a big responsibility to this nation because our issues are peculiar. And these issues are major issues, they are crosscutting, fundamental and we must deal with them; issues of religious intolerance, issues that can completely undermine the nation.  If we continue to carry on as if all is normal, we would be like the ostrich.”

All that is required to galvanize the media, he proffered, is a few dedicated people who would stay the course in asking hard questions. He included the celebrator, Kadaria Ahmed, among this group while commenting on her rested ‘Straight Talk with Kadaria’ on Channels TV.

Later in a panel discussion that featured him alongside publisher of The Cable, Simon Kolawole; Executive Director of Daily Trust, Mannir Dan Ali;  influencer,  Japhet Omojuwa and moderated by ex-Managing Director of Channels TV, Kayode Akintemi, the Vice President suggested that the media adopt a new business model to tackle its financial challenges and staff welfare.

“The media has to be lucrative as a business in order to be able to afford the kind of salaries that will make people comfortable. So, there has to be a business model for the media that works and that business model is crucial.  Obviously, those that are able to pay salaries not only have a good business model but also have integrity in their relationship with their staff which is important. But I think that there are a lot of media organizations that simply are not making the kind of money that they ought to make and are probably not working on the right business model. There are others making enough money but just don’t feel obliged to pay salary.

“Unfortunately, the reason why anyone would remain in a job where he’s not being paid, where there’s no prospect and no pension, it’s because he’s found some other means of earning a living within that system and usually those means are not the most honest means. The other thing is erect legislation that prevents you from owing salaries over a continuous period of time without filing for bankruptcy. In other places, if you are unable to pay salaries and are unable to meet your overhead, you are bankrupt. We do have bankruptcy laws but they need revision. But I think there must be consequences; if there are no consequences that cost you, people will continue to owe.”

Earlier in his welcome address, the Chief Executive Officer of Channels TV, Mr. John Momoh, referenced some of what Prof Osinbajo included in his keynote. He underscored the importance of the media to humanity, people’s attachment to media devices and the possibility of information overload, given technological advances.

This, Momoh said, makes it difficult to predict the future of the media. “So, what have we today? We’ve got chaos; confusion, fake news, hate speech, plagiarism, copyright infringement etc.  But the problem, you know as well as I do that the chaotic and disorderly situation is an antecedent of opportunity. So, whether you’re in the print journalism or broadcast journalism business, the future of the media is one that would be determined by three hugely disruptive forces: predicting content, virtual reality, and eradication of language barriers. It’s a new world of media and it’s ready for us. And if we use it properly, it should inspire and influence, not just entertain and inform.”

Aside from the new business model suggested by Professor Osinbajo during the panel discussion, other issues raised by the other panellists include a re-examination of the journalism curricular, continuous training for journalists, improved welfare and increased budgetary allocation the education sector.

The occasion, which also witnessed the presentation of ‘50 Voices’, a compilation of interviews the celebrator, had with high profile Nigerians on the rested ‘Straight Talk with Kadaria’ and edited by Uche Chibututu, also saw some journalism/mass communication undergraduates walk home with scholarships. There was also a question and answer session with Kadaria anchored by Ms. Ijeoma Onyeator of Channels TV.

As is to be expected at such events, guests also took turns to attest to the unique qualities that distinguish Ms. Ahmed, who now presents a monthly program called ‘The Core’ on Channels.

Three of the celebrator’s siblings including the wife of the Kaduna State Governor, Malam Nasir El-Rufai, Asia and her mother, Hajia Hafsat Abdulwaheed, the first published female Hausa novelist and Managing Director of Sun Trust Bank, Mohammed Jibrin, were also there to share in the joy of the occasion.