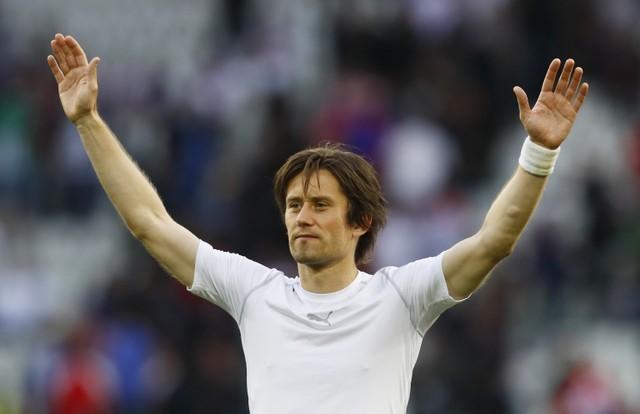 Czech Republic's Tomas Rosicky celebrates at the end of the match. REUTERS/Jason

Former Arsenal midfielder and Czech national side playmaker, Tomas Rosicky, ended his professional football career on Wednesday after years of injuries often kept him off the pitch.

Rosicky, 37, came through at Sparta Prague, where he is now also finishing his playing days.

He moved to Borussia Dortmund in 2001 and to Arsenal in 2006 where he played for a decade.

Rosicky, dubbed “Little Mozart’’ for his playmaking abilities, started 105 games for the national team, making him the third most-capped player in the country’s history.

His career, though, has often been plagued by injury, limiting his playing time especially in recent years.

“My body was telling me for a long time that it does not want (to do it) anymore,” he told a news conference.

“I will probably have nothing to offer my team mates and Sparta.”

“I lived through beautiful moments, but unfortunately also terribly negative ones,” he added.

“Without even thinking about, I will immediately do it again.”

Rosicky won a Bundesliga title with Dortmund and two FA Cups with Arsenal, for whom he appeared in 246 games and scored 28 goals.

He returned to Sparta Prague in 2016 and appeared 12 times for the side.