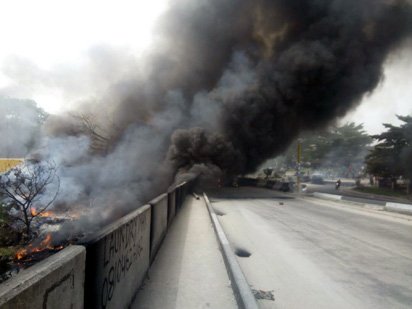 The Lagos State Government through the State Traffic Management Authority (LASTMA) on Wednesday announced an immediate closure of a section of the recently burnt FESTAC Link Bridge.

The closure, according to government, was as a result of expert advice by the State Ministry of Works and Infrastructure that the integrity of a section of the bridge was in doubt, and therefore needed to be closed down for repairs.

General Manager of LASTMA, Mr Olawale Musa, in a statement, said the precautionary decision was taken in order to save lives and properties of motorists and other users of the Amuwo Odofin- FESTAC Link Bridge.

It would be recalled that the bridge got burnt over a week ago when a fully loaded tanker upturned and spilled its content which led to fire outbreak.

According to Musa, “The Lagos State Traffic Management Authority wishes to inform motorists inward and outward of FESTAC Town using the link bridge that they would now be restricted to one section of the bridge for safety and easy movement of vehicles.”

Musa, who spoke after carrying out an on-the-spot assessment of the flow of traffic in the area, said the closure of a section of the bridge for repairs would not necessary lead to traffic gridlock and hardship in the axis, assuring that adequate arrangement had been made to minimize the impact on connectivity.

Already, Musa said the Agency had commenced earnest mobilisation of men and materials to the area in order to ensure free flow of traffic.

He said the visit was to enable him take a critical look of the area with a view to mapping out the best traffic management and control strategy that would reduce the negative impact of the closure on motorists and commuters.

“We like to assure motorists and residents that more men and materials have been deployed to the axis. To this end, we urge residents of the area, especially motorist and commuters to exercise patience and cooperate with the traffic officials for traffic to flow within the period,” Musa said.

He further assured that no stone would be left unturned for residents and motorists of Amuwo Odofin, FESTAC Town and adjourning communities to enjoy seamless traffic during the period of yuletide and beyond.