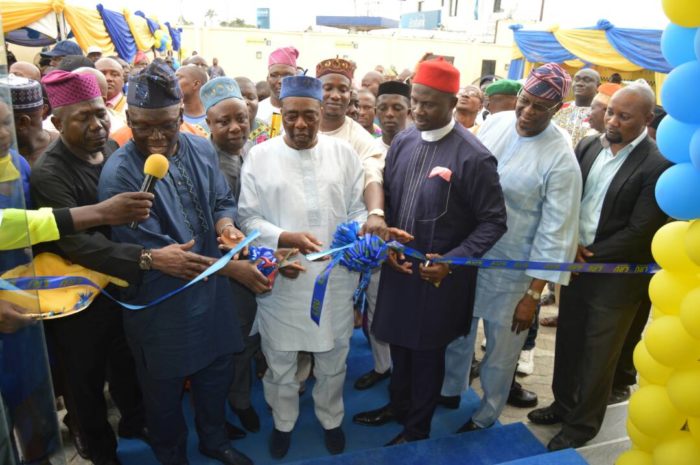 Lagos State Governor, Akinwunmi Ambode on Wednesday said that the capacity of the emergency responders of the State to combat emergency occurrences has received a boost with the commissioning of a new Response Unit located at Fadeyi area of the State on Ikorodu Road.

Ambode while speaking at the commissioning of the the LRU station, implored residents of the area and other relevant stakeholders across the State to ensure that the station performed optimally through the provision of relevant and timely information that would be beneficial for the emergency team.

The governor, represented by Commissioner for Special Duties and Inter-Governmental Relations at the event, Mr. Seye Oladejo said that his determination to provide adequate protection for the lives and property of Lagosians remained unwavering.

He disclosed that the new LRU, strategically located along Ikorodu Road is adequately equipped with emergency evacuation equipment of various capacities to complement the existing dispatch points located at Cappa Oshodi and Lekki areas of the state.

Senator Ganiu Olanrewaju Solomon, in a goodwill message, described the location of the LRU in Mushin araea as a privilege for members of his constituency, stressing that Ambode had consistently and constantly opening new chapters of surprises for Lagosians on a daily basis with various projects and infrastructural development.

The Senator added that Ambode has demonstrated that the safe and secure Lagos promised during his electioneering campaign is manifesting for all to see beyond mere words, “Governor Ambode is sincerely committed to the safety of the citizenry.” he stated.

Also speaking at the event, member representing Mushin Constituenxy II at the State House of Assembly, Olayiwola Olawale, said the fact that Lagos State had a very high rate of vehicular movement, including fuel tankers and articulated vehicles made the metropolis more susceptible to emergency occurrences.

He said that the Safety Bill recently passed at the State House of Assembly was a testimonial that the legislative arm of the state government was solidly behind the move of the Governor in the area of safety.

The Permanent Secretary, Special Duties and Inter-Governmental Relations, Dr. Jemilade Longe said that the event showed the genuine desire of Ambode to transform the state , which is the result of the visible progress currently being witnessed in all sectors and geographical spread of the State.

According to him, the feat already achieved by LASEMA could be sustained if the residents and other relevant stakeholders continued to cooperate with government in the activities of the officials of the agency.

“Apart from the fact that the safety of Lagosians is further assured, the confidence of investors acrosd the State would be strengthened the more knowing that Lagos State has the capacity to effectively respond to emergencies whenever it occurs,” he said.

The General Manager of the Agency, Mr. Tiamiyu Adeshina informed that the investment of the government in the area of emergency response had greatly assisted in the reduction of losses recorded in the course of the year compared to previous years.

According to him, accidents occurrences, loss of lives, property, road crashes, among several others had reduced to the barest minimal, stressing that the LASEMA team would not rest on its oars in providing swift responses to emergency situations.

“The Fadeyi Emegency Unit is a fulfilment to the promise made duriing the commissioning of LASEMA Response Unit, LRU, at Lekki in June this year that an Ultra-Modern Unit within the Central Lagos would be established.”

He called on Lagosians to always report suspicious moves to the Agency before it escalated into disasters.