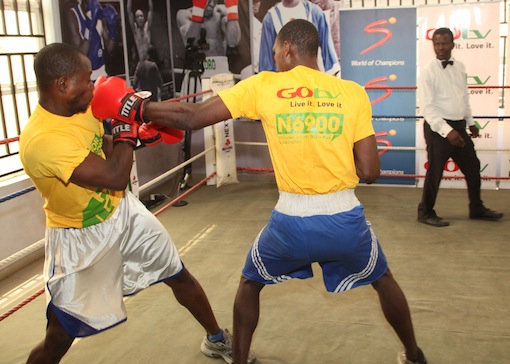 Ahead of GOtv Boxing Night 13, scheduled to hold on 26 December, boxers billed to fight at the event have been talking tough. The event, which holds at the Landmark Centre, Victoria Island, Lagos, will feature seven bouts and musical performances by Small Doctor, Simi, Falz and Reekado Banks.

Nigeria’s Oto “Joe Boy” Joseph, who is billed to fight Egyptian champion, Abdulrahim Ahmed, for the African Boxing Union (ABU) lightweight title, said his opponent will not last the distance.

“I am sure Ahmed will not go beyond the third round. I have waited for this opportunity and I can’t let it slips by. Ahmed will fall. Nigeria must triumph. I have to show Ahmed that Nigeria is the giant of Africa,” he said.

Olaide “Fijaborn” Fijabi, who will take on Shadrack “Punch to Punch” Kobero of Tanzania for the ABU light welterweight title, said he is convinced that he remains the best in the division on the continent. Fijabi added that he considers the ABU title as a stepping stone to a world title.

“Kobero can’t stop me. He will regret accepting to fight me. As a matter of fact, the title is already mine. I am aiming at the next level. We are not in the same class,” he bragged. Reigning West African Boxing Union (WABU) middlweight champion, Abolaji “Afonja Warrior” Rasheed, also vowed to demolish his Ghanaian challenger, Arye Ayitteh.

“The belt is staying here. It is mine. Unless I voluntarily relinquish it, nobody can take it from me. Ayitteh is just coming for sightseeing and punishment in the ring,” he said.

The best boxer of the evening will win N2.5million, while the runners-up will win N1million and N500, 000 respectively.