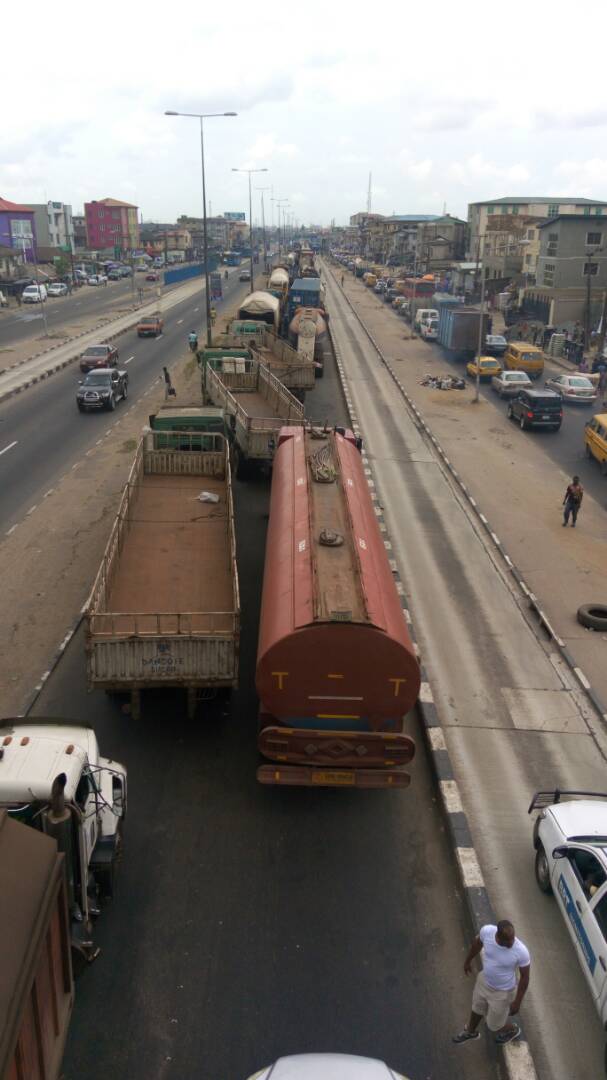 Ikorodu Road blocked by Trucks from the Apapa gridlock

Shippers (importers and exporters) are groaning over delays in business transactions at the Lagos ports due to the harrowing gridlock they are going through with a large volume of cargo trapped at the ports.

The gridlock has degenerated to increasing rate of cargo diversion to ports in neighbouring countries and the attendant huge revenue loss suffered by the Federal Government.

The shippers lamented the breakdown of infrastructure at the ports coupled with the gridlock caused by the bad state of access roads leading to the two major ports in Lagos.

Shedding more light on the problem, Mr Jonathan Nicol, President, Shippers’ Association Lagos State (SALS) said that the country lost an estimate of N1 trillion annually to ports in neighbouring countries due to bad access roads to Lagos ports and the gridlock

“There is massive diversion of Nigerian-bound cargo to neighbouring ports.

“There are also queues of vessels within the Lome waters awaiting call-up for berthing in Lagos ports.

“This will attract port congestion levy on Nigeria-bound cargo, which is no fault of the shippers.

“Demurrage on containers is increasing with no control from the respective maritime agencies. Importers and exporters are suffering,’’ Nicol explained.

The shipper said that apart from the revenue loss, demurrage, terminal charges and storage fees incurred by shippers galloped into billions of naira daily.

Nicol suggested that the contractor handling the rehabilitation of the Apapa Port road should expedite action to alleviate the problems encountered by shippers and truck owners.

“Industrialists with their raw materials consignments are incurring huge expenses on haulage due to lack of access roads and they are counting more losses daily,’’ the shipper said.

“There must be a minimal haulage fees control and ceiling. The Nigerian Shippers’ Council should please help.

The shipper added that truck drivers remained on queues for several days.

Nicol said that the export initiative of the Federal Government was also under threat as export goods spent several days before getting to the ports.

A report recently released by a Maritime Consulting firm, Ships & Ports Ltd. revealed that more than half of the container trucks visiting Apapa, Lagos, daily had no immediate business to transact at the ports.

The report issued by Mr Bolaji Akinola, the Chief Executive Officer of Ships & Ports Ltd., emanated from an independent study conducted by the firm and a don of the Lagos Business School, Dr Frank Ojadi.

The report explained that truckers who genuinely had business to do in Apapa Port spent an average Turn Around Time of two days.

According to the report, a total of 5,515 trucks were surveyed at both observation points – the start of Creek Road at the tip of Liverpool Bridge and the start of Wharf Road near Area B Police Command- over a period of two weeks.

The report also found that there was no presence of a traffic management system to coordinate the affairs of the multiple government agencies responsible for traffic control in Apapa.

It also explained that various stakeholders interviewed in the course of the study believed that the solution to the Apapa gridlock would be to compel shipping lines to receive all empties at their empty depots.

“The collapse of the Apapa-Oshodi Expressway, which is the major entry and exit point for trucks accessing the Tin Can Island Port, the Apapa Port and several tank farms in the area, has led to an increase in the number of trucks accessing these facilities through the narrow Apapa-Wharf road.

“This compounded the congestion on this stretch of road, ‘’ the report said.

The Executive Secretary, Nigerian Shippers’ Council, Mr Hassan Bello, said the council had a vintage position in the maritime industry to look into operations holistically.

Bello spoke on the occasion of the `Night of Appreciation’ recently held in Lagos by the council and the Federal Ministry of Transportation for stakeholders.

“The council is creating the balance that is needed to ease the ways of doing business at the ports.

“Port operations require synergy because there is need for unity, co-operation and integration to enable both government and stakeholders to have smooth operations,” the executive secretary said.

He said that the council was also working with shipping lines, terminal operators and ship owners, adding that the council had also signed a Memorandum of Understanding (MoU) with the Federal Road Safety Corps (FRSC) to improve port operations.

The Shippers’ Council is constructing nine Truck Transit Parks (TTPs) in the six geo-political zones of the country to sanitise the haulage system and serve as rest stops for truck drivers.

Bello said that all efforts would be geared toward issues affecting ports operations and analysing the seamless transportation.

He condemned the perennial traffic congestion on Apapa/Tin Can Ports axis.

“The problem we have today is that we have not seen the benefits of development in infrastructure, developing additional roads and redesigning the areas that are very close to the ports.

“In actual fact, I was moving around Apapa recently, I was pointing out the fact that there were lots of obsolescent buildings in the port environment that were not really of economic use anymore.

“It might be a good idea really if you can have people who are really forward looking to look at the possibility of acquiring some of these places.

“Knocking them down, developing additional infrastructure by way of truck parks, access roads and the problems we certainly have now will not be there,’’ Iheanacho said.

The Chairman of Apapa Local Government Council, Mr Owolabi Adele, pointed out that no less than 82 companies have relocated out of Lagos due to the gridlock in Apapa.

Adele stated that as a result of the traffic congestion, the Apapa area had lost so much revenue, as residents had also abandoned their homes.

It will be recalled that mid-year, stakeholders reached an agreement to take necessary measures to ensure reconstruction of Wharf Road leading to the nation’s premier port (Apapa Port).

Others are telecommunication service providers, the Apapa Local Government, representatives of Federal Ministry of Power, Works and & Housing, AG Dangote Construction Company Ltd, contractors of the project, among others.

The stakeholders agreed that the Federal Ministry of Power, Works and Housing and NPA should among others, collaborate to repair all bad roads and diversion routes, including Tin Can Island Road, Creek Road and Oshodi-Apapa Expressway, which will receive heavy traffic.

The Minister of Power, Works and Housing, Mr Babatunde Fashola, on June 17, handed over the Apapa Wharf Road to AG Dangote Construction Company Ltd. for reconstruction.

The site was handed over after the minister signed a N4.34 billion Memorandum of Understanding with stakeholders, who were to fund the project.

The project is to be funded by AG Dangote Construction Company Ltd., an arm of the Dangote Group, the Nigerian Ports Authority (NPA) and Flour Mills of Nigeria Plc.

The Ministry of Power, Works and Housing, on July 22, held the first stakeholders’ meeting with some concerned parties on how to achieve success and speed on the project.

The minister held another meeting with telecommunication service providers and others on how to relocate service cables and pipes in the Right of Way of the project.

The road reconstruction has a completion period of one year.

On the whole, industry experts advised government to be more committed to infrastructure development at ports.

The experts noted that infrastructure development at ports would boost the country’s economy, especially now that Nigerians were diversifying into agriculture for exports.