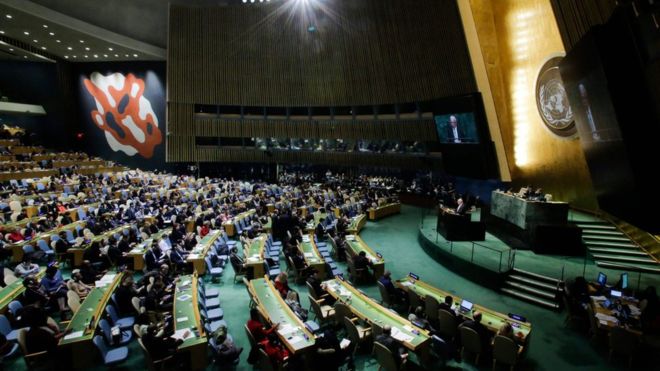 The UN General Assembly held an emergency session at the request of Arab and Muslim states
Photo: BBC/AFP

The UN General Assembly has decisively backed a resolution effectively calling on the US to withdraw its recognition of Jerusalem as the capital of Israel.

The text says that any decisions regarding the status of the city are “null and void” and must be cancelled.

The non-binding resolution was approved by 128 states, with 35 abstaining and nine others voting against, BBC reports.

It came after US President Donald Trump threatened to cut financial aid to those who backed the resolution.

Before the vote, the Palestinian foreign minister urged member states to reject “blackmail and intimidation”.

Israel’s Prime Minister Benjamin Netanyahu meanwhile said it would reject the anticipated result “outright” and dismissed the UN as a “house of lies”.