Brazil launches digital tool to monitor changes in land use 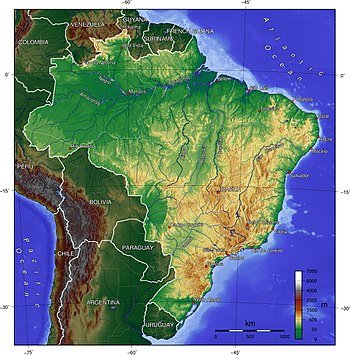 Brazil, the world’s fifth largest country, has launched a digital tool to monitor changes in land use, amid simmering violence over land ownership, corruption and evictions.

The government’s Brazilian Institute of Geography and Statistics (IBGE) said the interactive platform would be the first to map the entire country, not just special areas like the Amazon.

“The main purpose is to indicate where things are happening, at what speed and what is happening … if there was deforestation or if pasture or agriculture has entered (an area),” said the IBGE’s Maurício Zacarias Moreira.

“We can analyse the past, see the present and do (data) modelling for the future,” the natural resource manager told the Thomson Reuters Foundation by phone.

Rising violence between indigenous people and other land users, combined with often hazy property ownership and what activists consider high levels of impunity, have made Brazil the world’s deadliest country for land rights campaigners.

The London-based campaign group, Global Witness, said in July that 49 of 200 land activists killed last year were from Brazil.

Farming plays a key role in Brazil’s economy, pitting the government, which wants to boost foreign investment in agricultural land to rekindle growth amid biting recession, against opponents fearing deforestation and displacement.

The tool combines satellite and field data to visualise all 8.5 million square kilometres of Brazil, which occupies about half of South America.

Users can see vegetation cover, occupation and agricultural activities from the year 2000, and combine the information with other databases monitoring forests, indigenous lands and mines, Moreira said. It will be updated every two years, he said.

Clarissa Gandour, a senior analyst in Brazil with the Climate Policy Initiative, a U.S.-based think tank, said land use is a “first order” issue for the country.

The tool should help policymakers to plan future land use, she said.

Given the delay in updating data, the science ministry’s existing space-based assessments will remain more important for monitoring Amazonian deforestation.